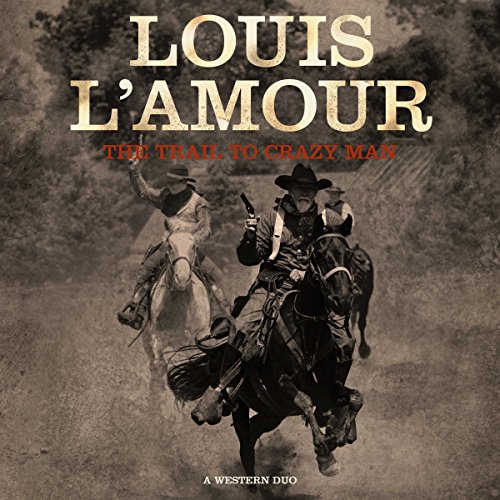 The Trail to Crazy Man

Louis L’Amour has been gone for many years but “The Tale of Crazy Man” is a good introduction to an entertaining storyteller.  L’Amour tells two short stories. Christopher Lane’s narration and twists of the second story make it the better of the two, but L’Amour’s skill pleases reader/listeners in both.

L’Amour’s stories are of an idealized American west where good always overcomes evil.  Though his heroes are preternaturally perfect, L’Amour satisfies a human desire for wholesomeness.

The first story in “The Trail..” is about a wild west gang leader’s adopted son who is to take over his criminal empire.  L’Amour infers the putative father lives in the American west when only the strong survive by being the most ruthless in the era in which they live.  The adopted son is shielded from that early western belief by being formally educated while being taught to be a great tracker who is fast and accurate with a gun.  As the father grows older, he grooms his adopted son to takeover the gang and a ranch that covers a wide area of the country.

The adopted son chooses not to follow his mentor’s outlaw ways. L’Amour implies the west is evolving, with education making a difference. By the end of the story, the father appears reconciled to the change. The adopted son seems destined to make future use of the former outlaw’s acquired wealth for peace and an improved society.

The second tale is about two cowboys that have been drugged and indentured by a tyrannical sea captain docked in San Francisco.  One cowboy dies on the ship with a commitment from the other cowboy to take care of his wife and daughter who he left in Wyoming. Before being highjacked, the dying cowboy had gone to San Francisco to pay off a mortgager on the ranch on which his wife and daughter were living.

When the deceased cowboy’s friend and some fellow captives escape their indenture, two of the cowboys stay together to travel from the west coast to Wyoming to fulfill the dead father’s last wish.  What the friends find is a small town, in which the wife and daughter live, is controlled by two men.  One of the men is the mortgage lender that had been paid off. He pocketed the payment without telling the wife and daughter that the mortgage had been paid. Then, he arranged for the dead father’s kidnapping by the San Francisco Sea captain.

The deceased father’s wife is dead.  The educated thug plans to marry the daughter who views the lying mortgage lender as a benefactor by not foreclosing on their ranch.  The uneducated thug plans to take the daughter by force. There are several plots in this second short story.    Both thugs are indirectly and directly dealt with by the cowboy who had made the commitment to the deceased father.

L’Amour writes with clarity and concreteness.  His stories are simple allegorical tales about good and evil.  They are wonderfully entertaining and leave one happy with the thought that good always overcomes evil. 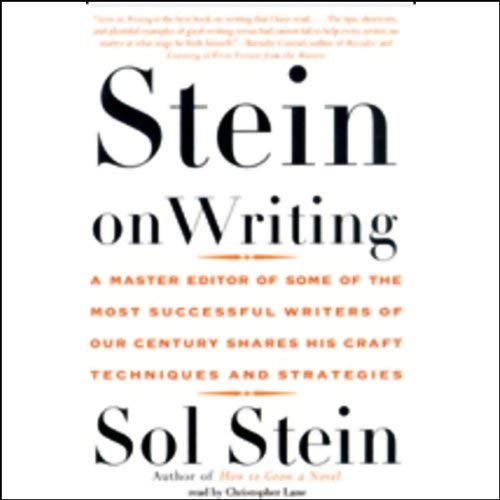 Stein on Writing
By Sol Stein
Narrated by Christopher Lane

Sol Stein’s book offers a road map to readers and writers. In reviewing books, one begins to understand what makes one better than another. One also realizes how much easier it is to be critical than objective about those who write..

Stein’s book is a writer’s road map. Stein’s map reveals where a story begins, which roads to follow, and where a story ends. He explains how to write action-ably.

Writers that follow Stein’s map see the highways and streets of writing a good story. An interpretation of what Stein explains would be: Do not write “he was upset”, write, “He hurled an ash tray through a living room window, sprinkling wet shards of glass across a brown patch of grass”.

The first line, “he was upset” is vague. It tells the reader what to think. The second line, “He hurled an ashtray…”, lets a reader come to their own conclusion. It makes the reader decide about a character’s mood. It offers a scene that stimulates a reader’s imagination.

The action of the line above uses what Stein calls “particularity” to focus a reader’s attention. The scene offers clues about a character’s life (an ashtray and a brown patch of grass). The value of using “particularity” sparks interest in knowing more about the ash tray thrower.

Think about Charles Dickens and “David Copperfield” and how a reader becomes invested in David’s life; i.e. how David’s sad and happy feelings invest in the reader’s emotions.

Stein notes differences between commercial and literary writing appear in accurate use of language, in universal emotive qualities of story, and in insight to human nature. However, Stein argues that a commercially successful book can miss many of these characteristics; while a classic misses few.

Stein explains the craft of writing is a store owner’s job; always there because he/she owns the business.

Stein offers more and says it better.  This is a book for the reference shelf; to be read; to be listened to; again and again.