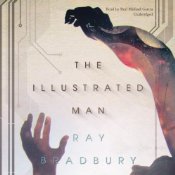 Flights of imagination sparkle and spin in this updated 1950s  Ray Bradbury classic.  This compendium of Bradbury’ tales is titled “The Illustrated Man”.

Bradbury spins stories; reminding one of late night re-runs of Rod Serling’s “Twilight Zone”.  Every episode sparkles with stars and planets, habitable by man but riddled with fear, death, and destruction.  Bradbury grasps human nature and turns it against itself by writing stories that illustrate man’s selfishness, insecurity, wantonness, and aggression.

Tattoos come alive on rippling skin to act out a series of plays about mankind’s future.  Everyone fears the illustrated man because his tattoos expose the worst in man.  Belief that nuclear cataclysm will end life on earth blooms like a mushroom cloud.  Traveling to other planets changes mankind’s environment but man’s nature remains the same.

These are not happy stories but they are great flights of imagination.  Bradbury tells a story of human exile and deprivation that exacerbates selfishness when personal reward is dangled in front of exiled and deprived human beings.  The dangled reward is stolen by one to keep it from the many; in the end the reward is destroyed by the selfishness of each against the other.

Insecurity is a devouring beast in the story of a planet blessed by an appearance of a Visitor (presumably Jesus) just before a rocket ship lands on the planet that has been visited.  The captain disbelieves it has happened and is driven to track down this Visitor rather than settle in the insecure surroundings of a unblessed world.  The captain is left to wander the universe, never to arrive in time to actually see the Visitor.

Human kind is aggressive.  Humans conquer and destroy civilizations.  One world of the future prepares for a second visit from mankind by becoming the image of a City.  This image devours the men of the second visit and assumes their bodies; i.e. the City image is transformed into the bodies of the humans from this second visit.  The City image plans to return to earth to destroy those who had destroyed them.

Bradbury is a master story-teller.  Paul Michael Garcia’s narration is a tribute to Bradbury’s skill.