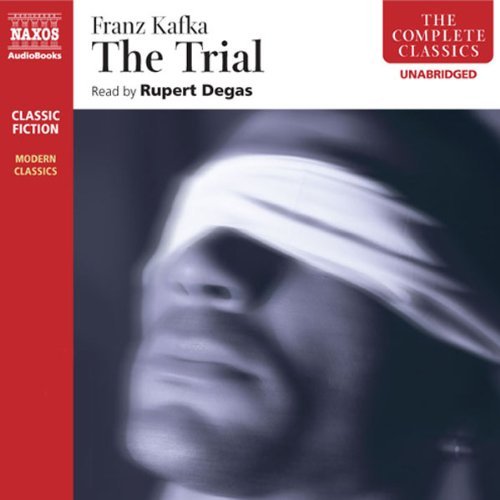 “The Trial” is a Franz Kafka picture of hell; i.e. a totalitarian nightmare, ruled by bureaucracy and controlled through human despair. “The Trial” is a book to listen to because it mesmerizes when narrated by an artist but numbs when read by an undisciplined mind.

There is no lightness in Kafka’s tale; no human redemption.  The main character, Ka (in this version of the book), is the only person that seems to seek self-understanding.

All other characters are “other directed”, trying to be what someone else expects them to be by playing whatever role they need to play to survive.

Kafka imagines a country of directionless people, subsumed in a bureaucracy that feeds on itself.

This is a country of directionless people, subsumed in a bureaucracy that feeds on itself.  Citizens of this country are either a part of the bureaucracy or they are controlled by its administration.

Control is exercised by creating fear and anxiety.  This characterization reminds one of Donald Trump and his current attempt to overthrow over 200 years of American government history.

Trump’s tacit support by the Republican party is a crime against democracy. Patriotic Republicans are diminished by Trump’s abhorrent behavior.

Should Trump be impeached a second time? It’s complicated. On the one hand, incitement by Trump on January 6th is obvious to most Democrats. On the other, Republicans now represent 70,000,000 Americans who think Trump is good for America.

There is no societal objective; there is only bureaucracy’s perpetuation.  Lawyers, bankers, judges, business moguls, landlords, artists, servers and assistants of this society, though rarely singled out for terror or torture, are consumed with anxiety from an ever-present threat of arrest.  The working public enriches itself by taking bribes to subvert bureaucratic action.  The working public’s subversion is not destruction of the bureaucracy but a tacit acceptance of its hegemony.

Ka attempts to break the cycle of bureaucracy’s self-perpetuation.  His attempt fails.

The redeeming quality of Kafka’s story is the human desire for freedom that is not extinguished even in the darkest times of a country’s repression.  Against all obstacles, Ka insists on freedom.  In Ka’s case freedom means death just as it did for many who died in Auschwitz, Dachau, and Treblinka.

Kafka’s hell exists in today’s world just as it did when it was published in 1925.