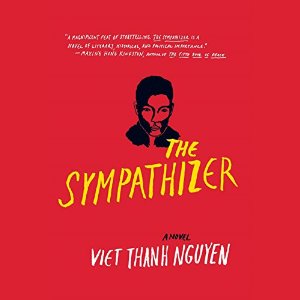 “The Sympathizer” defines the idea of a world citizen.  It is the first novel of Viet Thanh Nguyen.  In the beginning, “The Sympathizer” seems like another version of a war Americans would like to forget.  Chugging through the story a listener nearly derails but the denouement spectacularly realigns the senses.

As is widely acknowledged, America’s abandonment of Vietnam in 1973 left thousands of South Vietnamese soldiers in peril.  In 1975, the last American marine leaves the roof of the American Embassy in Saigon.  Nguyen’s novel begins with hard decisions made by South Vietnamese commanders to identify native supporters, and their families, who would or would not be saved by American military transport.  Nguyen’s main fictional character is chosen to be one of the lucky evacuees.  The irony of that selection is that he is a communist sympathizer, a spy.

Nguyen’s spy is a Vietnamese outcast.  He is one of the “children of the dust” noted in the musical “Miss Saigon”.  He is a bastard son of a white American priest who seduces his teenage mother.  As a sympathizer, he becomes an undercover agent working for a committed South Vietnamese general.  It appears this communist sympathizer has gained the trust of the General by being the go-between for the murder of North Vietnam collaborators.

The General is planning an insurgent action to be organized in Thailand to attack communists in Vietnam.  The sympathizer’s best friend is selected as one of the people to go to participate in the insurgency.  The sympathizer asks the General to let him go.  However, his primary reason for going is to protect his friend.  The General initially says no but recants when another suspected spy is targeted.  The General advises the go-between sympathizer that he does not feel he is qualified for the Thailand mission because he has never killed anyone himself.  If he can murder the newly suspected spy, the General will let him go on the Thailand mission.

While many escaped death from America’s abandonment of the South Vietnamese, the communist friend who stayed is severely wounded from an American napalm attack.  His experience from the severe wounds and life under communist rule appears to have taught him an indelible lesson.