Human Action (A Treatise on Economics)

America is on the threshold of the largest tax change since Ronald Reagan’s presidency.  If past is prologue, trickle down economics will not work, the deficit will rise, and the poorest will  be victimized.  The genesis of the delusion of trickle down economics comes from interpretations of a modern Machiavelli.

Ludwig von Mises is a twentieth century Machiavelli.  This near 48-hour audio book details a theory of economics that will offend modern liberals, expose weakness of libertarians, and vilify the new American President’s nationalist policies.  The venality of treating government as a business is a mistake of monumental proportion.

Approaching von Mises as a devil incarnate is unfair.  His beliefs are pilloried by today’s liberals as loudly as aristocrats and rulers vilified Machiavelli in the 16th century.  Like Machiavelli, von Mises looks at the world as it is; not as it ought to be.  His observations cut at modern liberal, as well as anarchic, views of highly regarded liberals like Ralph Nader, Martin Luther King, Norm Chomsky, and alleged conservatives-like President Trump.

Von Mises observations have historical credibility.  What they do not have is social conscience.  In fact, he suggests social conscience is a fiction perpetrated by populists to distort the value of capitalist economies.  Like Machiavelli, von Mises observes the nature of human beings, and recognizes their inherent irrationality and moral weakness.  Von Mises illustrates numerous examples of human irrationality; beginning with market consumption, and ending with entrepreneurial ambition.  Donald Trump exemplifies von Mises argument that humans are irrational, greedy, power-hungry, and vain.  For President Trump to believe taxing imports by 20% makes Mexico pay for a useless five-billion-dollar wall is absurd.  The American consumer will pay for that wall in increased cost of Mexican produce and manufactured goods.

Von Mises criticizes famous economists like David Ricardo for introducing politics into economics.  Von Mises argues that the drive for money, power, and prestige are inherent in an entrepreneurial capitalist system.  Von Mises argues that government officials who profess social conscience distort free enterprise by picking winners and losers.  When politicians pass legislation that aids one entrepreneur over another, it distorts the driving force of capitalist economies.  He equally vilifies government leaders who impose tariffs on international trade.  Von Mises explains that the fallacy of government leaders who pass favoring legislation is that the real mover of the economy is the consumer; not the producer.

The logical extension of von Mises’ theory is that any government planning or action that affects an entrepreneur’s willingness to take a risk to produce product, or service a customer’s perceived needs, is bad for society.  To von Mises, efforts to organize labor is an interference with capitalist entrepreneurs because labor is not taking a risk. Von Mises argues that labor costs will find its own level by being an automated tool of the entrepreneur; subject to hunger and deprivation if they choose not to participate.  Von Mises point is that the entrepreneur will pay what he/she must to have labor available, but no more than what the end-product consumer is willing to pay.  Von Mises believes labor has a choice.  They can work for low wages or remain idle.  The fallacy of that argument is the inherent unfairness of not having enough income to live creates revolutionary discontent.

Unions offer a vehicle for leveling the power between businesses and labor.  To not allow unionization is tantamount to favoring businesses that are no longer competitive but are today recognized as an economic equivalent of individuals.  Not to give unions a place “at the table” is morally, ethically, and economically unfair; particularly in industries that are no longer entrepreneurial.

Another von Mises’ observational theory is that government policy should have no role in subsidizing new inventions, new drugs, the ecology of the world, or the elimination of slavery because such policies interfere with pure capitalism. This reinforces absurdist arguments of libertarians.

American creativity has historically been benefited by government subsidization of technological advances.  (President Putin noted in a 60 Minutes’ interview that creativity is his most admired quality in the American economy.) The speed of improvements in health, education, and welfare historically increased with government subsidization of drug research, public education, and the energy industry.

The fallacy of von Mises’ theory lies in the framework of theorists.  It ignores human existence by hiding behind the unquantifiable nature of society.  One may argue that America’s Civil War had nothing to do with the elimination of slavery.  (Von Mises suggests that slavery was abolished because it became too expensive; not because it was morally and ethically reprehensible.)  One may argue that Roosevelt’s New Deal was a failure.  One may argue that the Marshall Plan after WWII rewarded failed nations.  One may argue that George Bush’s and Barrack Obama’s decisions to bail out the American economy interfered with pure capitalism. History suggests von Mises is wrong.  Government intervention can be good as well as bad.  (Bush unilaterally agreed to lend $17.4 billion of taxpayers’ money to General Motors and Chrysler, of which $13.4 billion was to be extended immediately.)

Von Mises lived into the 1970 s.  How could he ignore the moral and ethical iniquity of slavery, the value of the Marshall Plan, government subsidization of the American banking system, financial incentives for the energy industry, and the billions spent to advance technological inventions?  Those are good examples of government intervention.  On the other hand, building a wall between Mexico and the U.S. and levying a 20% import tax is a bad government intervention. 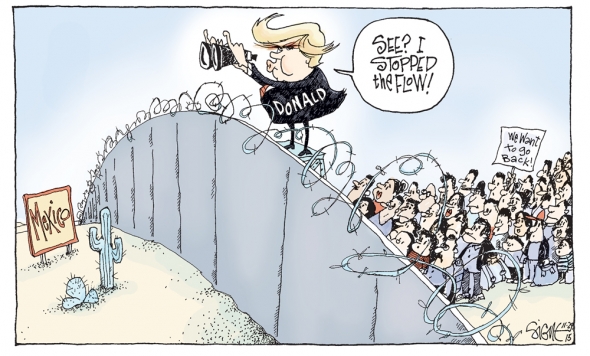 American capitalism works because of the checks and balances written in the Constitution.  Von Mises theory is based on valid observations but social conscience, whether statistically measurable or not, must be a part of decisions that affect the lives of millions.  Mistakes will be made, and have been made, but economic statistics cannot be substituted for pragmatism.