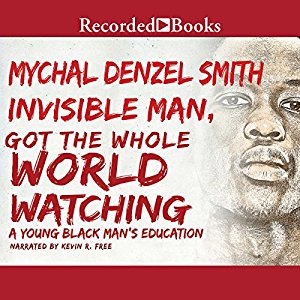 Mychal Smith’s book is difficult to listen to for a white liberal; i.e. the difficulty is more because of what Smith sees than what he does not see.  The necessary truth of what Smith sees is that being black, female, homosexual, or any color but white disadvantages citizens who live, work, and love in America.  Smith correctly notes that Barrack Obama did not change that truth.  But, for a liberal, Smith’s criticism of Obama is heart-rending.

Smith’s expectation is superhuman.  No singular person will ever unwind history’s discrimination.  Obama is an extraordinary human being by any standard of measurement.  That Obama is black and became the first black president of the United States proves being human is the best one can be.  Martin Luther King’s “arc of justice” still bends toward freedom and equal opportunity for all; despite the world’s, let alone Obama’s, failings.

The nature of humankind is an evolutionary work in progress.  Sadly, evolution is a chancy proposition that moves human nature both backward and forward.  Maybe, humanity will never get to a state of freedom and equal opportunity, but Obama’s “audacity of hope” is better than anger, and fear.

Smith cites Malcolm X as his ideal of black resistance but fails to note that Mr. Little evolved to believe separate but equal is a fiction.  Malcolm X broke from the Nation of Islam because of its belief in Black separatism and superiority.  Malcolm X’s life experience and intelligence led him to believe all people are human beings.

In being human, there is good and bad in every race, color, and creed. None of this denies Smith’s recognition of the questionable murder of Trayvon Martin, or the Jena Six debacle in Jena, Louisiana where a white high school student is beaten by five black teenagers.  Both incidents are riven with racial hatred, lack of justice, and human failing.

Smith gravitates to violent lyrics to say the anger of rap artists appeals to his inner frustration.  Smith recounts the considered statements of Kanye West when President Bush fails to conscientiously respond to the Katrina disaster in New Orleans.  (West suggested Bush did not care about black people.)  Ironically, Kanya West appears to support President-Elect Donald Trump who was sued for discrimination under the fair housing laws of the United States.

There are many incidents that Smith recognizes as the failure of white America to treat minorities fairly.  At the same time, Smith is introspective in acknowledging some of his own human failings.  He writes of his fears, his desire to be a great writer, and his earlier life failure to understand how important women’s rights are in the black community.  He writes of his father’s concern over his sexuality and how gender discrimination has some of the same hatred, lack of justice, and human failing as black discrimination.

Listening to Mychal Denzel Smith is difficult because his observations explain why he, if not most, black Americans are disgusted with white America.  It makes a white person feel guilty because white Americans are the majority; and, as a majority, white (particularly male) America has the bulk of the country’s money, power, and prestige.  Until all people are humans first, there seems little reason to believe there is much hope for the “arc of justice” to bend toward freedom and equal opportunity for all.

What Smith fails to fairly acknowledge is who is at fault.  All of us share the blame.  Human beings must recognize the humanity of all human beings.  If evolution is not the answer, then human will (in a Nietzschean sense) must come to America’s aid.