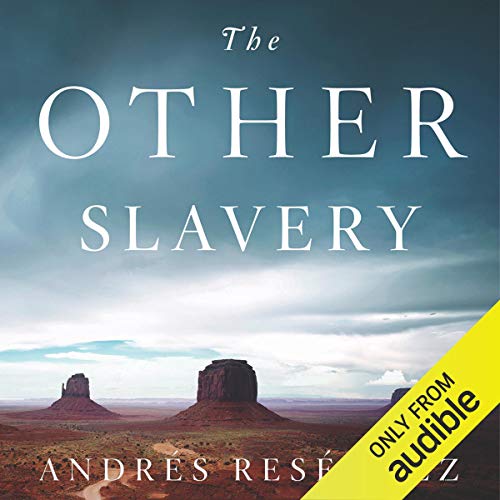 The Other Slavery (The Uncovered Story of Indian Enslavement in America)

Andrés Reséndez (Author, Historian, Ph.D. in history from the University of Chicago.)

As is well known, slavery has been a societal constant since the beginning of recorded history. Today, it appears in pornography, low wage peonage, so-called re-education camps, and political/social incarcerations. What Reséndez explains is that Indian tribes of the west are increasingly incentivized by slavery with the arrival of foreigners. Though slavery may have been used by Indians earlier in history, it became a significant source of revenue for warring tribes.

One Indian tribe captures a different tribes’ sons, and daughters to trade for money, horses, guns, and butter from the Spanish or later settlers who need cheap labor or who seek domestic help and/or carnal pleasure. Reséndez notes young women’s slavery prices are higher than young men’s because of their dual service as domestic laborers and sex objects. Over time, as Spanish land holders are replaced by American land holders, Indians remain a source and victim of the slave industry.

Men, women, and children are used by land holders and competing Indian tribes as barter for trade.

Santa Fe, New Mexico becomes a focal point of conflict between Pueblo Indians and the Spanish. The victimization of Pueblo Indian slaves leads to a rebellion that removes Spain from the New Mexico territory, at least for several years. However, the lure of silver brings Spain back with a slave trade resurgence in southwestern territories of America. Reséndez  explains the slave trade becomes endemic as silver is discovered in Mexico and the southwest territories.

The need for cheap labor in silver mines multiplies the value of Indian slaves in the southwest.

The slave trade never dies. Greed drives Indian tribes to steal people from different Indian’ tribes to profit from human sales to landowners looking for cheap labor. Reséndez notes it is not just Indians victimizing Indians but American and Spanish landowners buying young men and women Indians and other human victims to serve as low-cost labor for silver mining, farming, and domestic service.

Reséndez notes male slaves were more difficult to manage than women slaves but for strength males were coveted for their labor in silver mining. Some of the mines were deep in the earth, all were dangerous. Underground mines were flooded with carcinogenic mercury tailings that shortened the lives of those who worked there.

Slavery goes by many names. As is known by historians, the Dawes act further victimizes native Americans.

Reséndez reveals how slavery has always been a part of society. Self-interest is a motive force of human nature. Slavery is found in penal colonies of authoritarian governments to provide cheap labor. Slavery is also found in democratic governments that legislatively reduce the cost of labor based on corporate influence on public policy. A free market, not lobbyist influence, should determine public policy.

The hope for elimination of slavery lies in government policy that reinforces belief in human equality and a balance between corporate profit and cost of labor as determined by a free market.