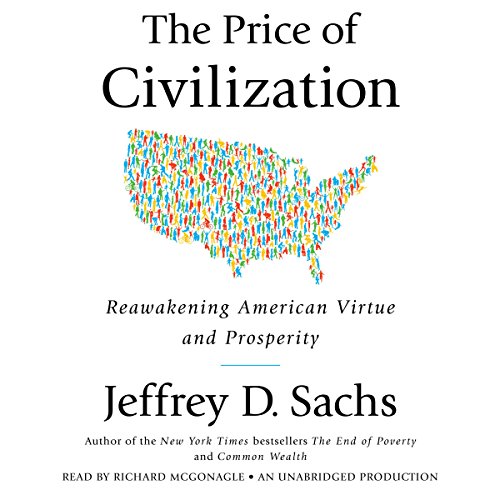 The Price of Civilization

Jeffrey Sachs skewers modern Presidents and lionizes John Kennedy.  Written before 2016, one wonders what Sachs might have written about President Trump.

One can easily agree with many of Sachs’ observations of what is wrong with America but his solutions are academic; not pragmatic.  Sachs is too much of an idealist. Corporatism is an out sized economic benefactor for the United States but, as Sachs infers, it is also American democracy’s greatest threat.

Government checks and balances are America’s only defense against corporatism.

“The Price of Civilization” is an unsatisfying audio book.  Not because it is irrelevant but because it’s saccharine idealism and disconnection from the real world.

Though much of Sach’s criticism of Obama, George Bush, Bill Clinton, and Ronald Reagan is deserved, his professorial economics is cloying because it ignores political reality and the truth of human nature.

The father of American economics, Adam Smith, is the first to have recognized the critical role of politics in economics.

Sachs is spot-on as an academic economist. Trump and many elected officials ignore political reality.  Public policy has always been a matter of “who’s ox is getting gored” whether Democrats, Republicans, or despots are in control of government.

Sachs cleaves to Platonic and Aristotelian platitudes like “all things in moderation”. To suggest that a philosophical awakening of the millennial generation (those born between 1977 and 1992) will cure American lassitude and political apathy is naive.


Sachs optimistically believes the millennial generation will eschew the luxuries of American dreamers (owning hot cars, nice homes, and beautiful clothes) to become voters for change.  Obama represents those voter’ beliefs but fails politically for the same reason Sachs’ book is a mess.

Changing public policy is not going to occur with an American generation that magically begins believing less is more. Re-election of a new President, whether Democrat or Republican, will not fundamentally change America’s system of choosing corporate winners and losers.

One can agree with Sachs’ observation on 2010’s “Citizens United v. Federal Election Commission” decision. The Supreme Court erred in identifying corporations as individuals with the rights of unlimited corporate donation to electors.

Defeat of gun control legislation shows how entrenched lobbyist organizations can steer the course of public policy, regardless of a democratic majority’s support of policy change.

Sachs is right in his assessment of the wrong-headedness of what he calls “corporatocracy”; i.e. the institutionalization of an election process that is founded on money rather than public representation.

Human nature gets in the way of doing the right thing.  Humankind naturally seeks freedom.  (Las Vegas demonstration to reopen the economy during the pandemic.)

When freedom of choice is impinged upon, human beings are reluctant to change.   Of course, this is an over simplification but Sachs minimizes mankind’s innate desire for freedom.

Las Vegas mayor Goodman wants to re-open the economy in the face of Covid19. She believes freedom and survival of the fittest is a matter of human nature; not government fiat.

She infers–if its your time to die, so be it.

Regulation of human activity impinges on free choice whenever one person thinks they know what is best for another.

Human nature is not going to change; i.e. it will always contain good and evil intention. Bernard Madoff comes from the same culture as Warren Buffet.

Trump and the Republican party’s approved tax law illustrates contempt for the middle-class, and ignores the poor.

Many Americans are disgusted with the political process in 21st century America.  Even the super rich and rich are not satisfied with the status quo.  The rising gap between rich and poor embarrasses the rich.

How can America justify a social security tax for a movie actor’s (or sports star’s) income of millions per year when a middle income family makes $40,000 to $132,900 per year and has to contribute the same amount as a multi-millionaire.

A person with a middle class income will pay 6.2 percent of their income for social security. There is a maximum cap of $8,239.80/year/person. One who makes millions of dollars per year will not have to pay more than that $8,239.80/year; i.e. the same maximum amount a middle income person pays. No wonder social security is going broke.

When one is elected to congress every two years, fund raising becomes the elector’s primary focus of attention.  When corporations speak, electors listen.  Lobbyists and corporate money are more important than the aggregate input of voters.  No wonder American voters are apathetic.

Sachs notes Oliver Wendell Holmes dictum about taxes.  Holmes wrote that he loved to pay taxes because taxes are the cost of civilization.  The weakness of that generalization is in the definition of civilization.  If civilization is that stage of human social and cultural development and organization that is considered most advanced, why does the richest country in the world:

When a government under performs when public tax dollars are invested, voters cannot, without revolution, change governments.

Sachs accurately notes there is no difference between Democrats and Republicans in the United States.  Both parties talk the talk but fail to walk the walk. Elected officials are too beholding to lobbyists and corporate America.

Americans are reluctant to pay higher taxes because they see no discernible improvement in their lives.  Why invest in a government (pay more taxes) that fails to produce improved results?

All of these goals are exemplary but to get there requires a massive (and unlikely) re-invention of human nature.   One could argue that many of these policies were promoted by the Obama administration, but little changed.

It is counterintuitive for a free society to choose moderate consumption.  Add mistrust of the American government and the likelihood of turning more money over to a government that does not work seems stupid to any rationale human being.

Hitler wrote in Mein Kampf, “Industry, technology, and commerce can thrive only as long as an idealistic national community offers the necessary preconditions.  And these do not lie in material egoism, but in a spirit of sacrifice and joyful renunciation.”

Hitlerian characters are a threat to America when corporatism is the basis of public policy.