The Complete Essays of Montaigne 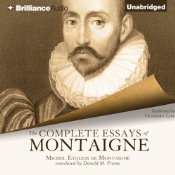 Michel Eyquem de Montaigne, a sixteenth century philosopher and writer, wrote and re-wrote “Essays”, originally published in the 1580s.  Essay was a new form of writing.  Montaigne’s subject is the philosophy of life and death.

Montaigne writes his collection of essays while cloistered in a château in southwest France.  Donald Frame translates and compiles three volumes of Montaigne’ essays into one book–“The Complete Essays of Montaigne”, first published in 1957.

Montaigne, born into a family of wealth, affords the luxury of time for personal reflection and contemplation.  Not surprisingly, Aristotle wrote that life depends upon awareness and the power of contemplation.  In one respect, this quiet life is a contradiction in Montaigne’s philosophy.  Montaigne reflects on history and ancient times to explain how life should be lived when his life seems a shadow of most people’s reality, the reality of a day-to-day fight for survival.  There is reader skepticism about the 1% life of Montaigne versus the 99% life of most people.

Montaigne, with great family wealth and a storied education, becomes a Mayor of Bordeaux.  He draws on a privileged life and recorded lives of great philosophers and leaders to create insight about lives of those that “do”, and have little time, or no time, to contemplate.

Montaigne suggests the appeal of his essays lies in the middle of the human population.  Montaigne suggests the in-between are those who are not highly intelligent, who are abysmally ignorant; preferentially plebeian, and ordinary.  In other words, people of course nature and manner, like this critic.  In spite of this elitist leaning, the wisdom noted in Monsieur Montaigne’s essays is enlightening.

This is a one thousand page journey with something for everyone.  Montaigne suggests humans need to embrace life and eschew tragic interpretations of death.  Life and death are only stories of being.  Death is inevitable and should not be feared.  Death should be embraced like life; it is merely a final act, a denouement of life; well or poorly lived.  In Montaigne’s opinion there are justifications for ending one’s life volitionally but only for valued reason.

Montaigne is Epicurean in the sense that he believes living life is meant to be a pursuit of pleasure.  However, the pursuit of pleasure is not defined by money, power, or prestige.  Those pleasures are diminished by their attainment because they are insatiable human desires.

Power never rests.  Power is always moving like an electron around a nucleus of followers.  Leaders are enslaved by followers.

Leaders worry about followers, worry about competition for position, worry about their place in history; they die alone just like every human being.  Power is an ephemeral pleasure that never rests in one place.

Prestige comes from respect of fellow human beings.  It is outside the control of the seekers or the chosen; it is limited by the opinion of others; it changes like the direction of the wind or the habits of the culture within which one lives.

Montaigne attacks cultural shibboleths that are based on unfounded reason.  Because one says the earth is the center of the universe does not make it so but a universe of fiction may grow around a culture of mysticism that defies the natural state of being.  Montaigne insists on skepticism when confronted with culturally reinforced habit that is not bound by nature.

Pleasure lies in self-understanding; doing what one is best at; and letting go of life when it fails to improve self-understanding or keeps one from valuing existence. Montaigne cites many ancient philosophers like Plato, Aristotle, Epicurus, and Lucretius that reinforce his arguments.

Plato drives the point of virtue as the human characteristic of doing what one is best at doing.  Montaigne notes that both Plato and Aristotle emphasize the importance of education for self-understanding.  Self-understanding inures to the benefit of humankind by revealing to each what they are best at and giving them tools (through education) to be the best they can be.  Montaigne insists on learning; not rote memorization, but clear understanding.  Montaigne argues that it is not reciting what someone has said but understanding what is meant by what is said.  This is a somewhat ironic statement in view of Montaigne’s voluminous quotes from dead philosophers.

Montaigne reflects on his upbringing and his Father’s drive to educate his son by making Latin Montaigne’s first language, the language of scholarship in the 16th century.  Montaigne did not only live the life of a scholar.  He was elected mayor of Bordeaux before retiring to his cloistered existence as a writer of the “…Essays…”  Montaigne applauds his father for providing him an education and infers that every family is obligated to support education of their children.

Montaigne died from complications of tonsillitis at the age of 59.  Frame’s translation of Montaigne’s essays offers a philosophy of life in a horse-size pill.  It encourages the old but escapes the young because life happens too fast.

As George Bernard Shaw notes, youth is wasted on the young; probably because they are too busy for contemplation.  “The Complete Essays of Montaigne” is an insightful guide for the conduct of life and the acceptance of death.

3 thoughts on “A PHILOSOPHY OF LIFE”