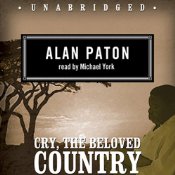 In reading “Cry, the Beloved Country”, one should remember it was published in 1948. Alan Paton’s book updates Stowe’s “Uncle Tom’s Cabin”. It is less brutal than Wright’s “Native Son” or Morrison’s “Beloved” but it strikes at the heart of apartheid and the insidious nature of discrimination and slavery.

Paton was a South African white man who lived the life he wrote about. Paton, among other things, managed a black reform school in South Africa in the early 40s. One is reminded, in some ways, of Nelson Mandela’s life in Paton’s main character, Stephen Kumalo. In other ways, Mandela moves way beyond Kumalo.

One can argue Kumalo deserves the pejorative meaning of a modern “Uncle Tom” definition. But Paton makes the reader or listener walk in Kumalo’s shoes. Maybe Kumalo is “a black man considered to be excessively obedient or servile”; on the other hand, Kumalo is a hero—the best of what human beings can be in the circumstance of history. Therein lays a comparison with Mandela and his decision to invite a suppressive white government into his administration. The goal of Paton, his character Kumalo, and Mandela was to preserve a beloved country.

The execution of Kumalo’s son, the prostitution of his sister, the corruption of his brother are consequent behaviors of discrimination; Kumalo sees but fails to act because he is seduced by faith and constrained by white suppression.

Life is full of compromise; full of good and evil. The fictional Kumalo and real Mandela did the best they could in the circumstance of their lives; which seems better than can be said of 99% of the human race.

“Cry, the Beloved Country” begs the question of what is right by inferring much of South Africa’s suppression was driven by white’ fear.  More succinctly, discrimination is shown by Paton to be a complex evil.

Paton creates characters with a growing white understanding of the damage caused by discrimination while subtly injecting a more militant black movement. Again, one is reminded of Mandela’s early life which led to imprisonment.

“Cry the Beloved Country” gives one some sense of what life must have been like for Nelson Mandela.