Beyond: Our Future in Space

After listening to Chris David Impey’s book, “Beyond: Our Future in Space”, traveling to other worlds seems distant and unachievable.  Impey cleverly begins his story about space travel as though the first human to permanently leave earth is born in the 21st century.  That novelistic beginning is revisited twice, but the true subject of “Beyond: Our Future in Space” is the physics, astronomy, and observational cosmology of the present day.

One presumes Impey’s purpose is to encourage the possibility of reaching the stars but, by the end of the audiobook, little optimism is left to the listener.  The daunting task of overcoming gravity, surviving an inhospitable environment, and leaving the only home humans have ever known, warrants some pessimism.  Some minor relief from pessimism is offered with world history’s comparison of human migration across the continents.  Impey implies history’s adventurers on earth have something in common with adventurers in space. 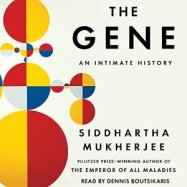 The literal common characteristic of adventurers is a gene called DRD4.  Impey suggests DRD4 alleles have evolved in 39 population groups that have historically migrated over long distances.  These population cohorts are loosely classified as risk takers but, with a 7R variant of this gene, they have a higher incidence of attention deficit hyperactivity disorder (ADHD), schizophrenia, bipolar disorder, and addictive behavior.  This observation seems unlikely to inspire confidence in “…Our Future in Space.”

The next difficulty of space exploration noted by Impey is escaping gravity.  Current science shows fuel propellant is 80% of the weight of a rocket launch.  Without a more efficient source of propulsion, sending thousands of people on earth to another planet is a pipe dream.

Impey notes that science is exploring alternatives like sail power, nuclear fission, radiation collection systems, and the physics of teleportation, via spooky action at a distance, but the evidence of success is either solely theoretical or miniscule.

Political will for space exploration has dwindled since the 1960s.  American government financing has dropped from nearly 4.5% to well below 1% of the Federal Budget.

NASA has nearly been dismantled.  Most research and development is being done by one-off entrepreneurs like Elon Musk, Burt Rutan, and Robert Bigelow.  Part of the reason for the loss of political support is its cost.  Current science shows it costs more than $1,000 per kilogram for human and/or cargo delivery to the space station.

It is encouraging that reusable launch vehicles have potential for reducing that cost but space tourism seems a long way off.  Until humans experience space flight, it seems unlikely a Columbus or Matt Damon is waiting in the wings to set sail for Mars.

Impey makes the case for habitable planets in the cosmos based on current robotic, radio signal, and telescope explorations.  He argues there is growing evidence of many planets orbiting stars outside earth’s solar system.  From year 2000, the number of exoplanets (those orbiting stars) increased by more than 775 planets.

Impey goes on to explain space voyage and exoplanet living’s physiological effect on any human that chooses to leave earth.  There is the detrimental effect of radiation, extreme temperature, lack of water, lack of oxygen, and reduced gravity.  All of these space voyage and planetary differences discourage optimism about “…Our Future in Space”.

However, Impey soldiers on.  He revisits the novelistic idea of the first space explorers by noting extensive sociological training, refinement of suspended animation, and psychological profiling to create ideal space voyager teams.  Impey notes that several animals have been put in a state of suspended animation and revived; i.e. implying that humans could be put in the same state of suspension for long space voyages.

As a fall back, Impey suggests an alternative to human exploration of exoplanets.  He writes about advances in nanorobotics; i.e. miniscule components that can function as human substitutes for exploration of exoplanets.  The reduced size of nanorobotics decreases payload weights and increase the speed and distance that can be traveled for space exploration.  This still leaves propulsion for great distances an issue but it mitigates human risk.  The presumption is, with more information about exoplanets, political will for space exploration will increase.  With better funding, the science to support human beings “…Future in Space” will be expanded.

Finally, Impey touches on Kurzweil’s singularity and the advance of Artificial Intelligence, where computers equal and/or exceed the capabilities of human beings.  In Kurzweil’s world, either AI will explore other planets on its own, and/or AI will meld into the human race to mitigate all the negative consequences of space travel.

Who would have thought that human beings would set sail for a new world when many thought sailing from land meant you would fall off the edge of earth?  Maybe that is where space exploration is today.  Impey’s fictional character arrives at an exoplanet with her team at the end of “Beyond: Our Future in Space”.  Now that is optimism.