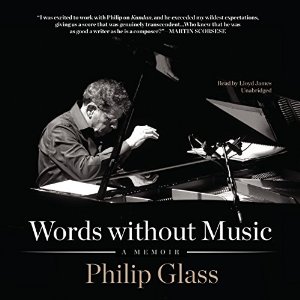 Words without Music: A Memoir

“Words without Music” is a memoir of Philip Glass’s transformation to creative adult.  This is a journey taken by every child–with greater and lesser degrees of actualized creativity.

Glass recounts his childhood with a description of his ex-Marine father, and school teacher mother.  Glass’s father is a small business entrepreneur who raises his children in a rough New York neighborhood.  Strength, determination, and adventurousness come from Glass’s father.

Glass explains how his father feared little in a neighborhood of gangs; while managing his record business with an iron hand. Glass learns how to overcome fear in working in his father’s record shop and taking the proceeds of the day to the bank at the end of the day.  Glass sees himself, as though in a mirror, when he chooses not to tell his father of a customer’s theft of a record.  Glass knows his father will act reflexively by over-zealously punishing the thief.

Glass describes the soul of his family as his mother.  She is the conservator, the method-of-living key to Glass’s growth as an artist.

Glass strives to be a good student and is accepted by the University of Chicago based on academic tests rather than high school graduation.  He chooses to become a musician based on early experience as a flutist, and later as a pianist.  He finds from counseling with a Julliard alumnus that composing rather than playing music is more conducive to his innate ability.  In these pursuits, Glass’s mother is his rock, his supporter and adviser.

After graduating, Glass chooses to travel to Paris in pursuit of a composer’s education.  He is mentored by an older woman who provides the technical skill and stern loving support he needs to continue his journey toward actualization.  Glass chooses to leave his mentor with a woman of his own age and travel to India.  Glass sees himself in a way that requires reinforcement from others.  “Others” are teachers of the ancient practice of yoga.

Glass returns to America with a wife, with whom he has two children.  He lives in New York and works as a furniture mover and taxi driver while pursuing his education as a composer.  Glass is approaching thirty.  He begins to have serendipitous success.  The first big break is an opera called “Einstein on the Beac

Glass’s journey is symbolized by his dissection of the works of Jean Cocteau; i.e. particularly La_Belle_et_la_Bête (Beauty and the Beast).  Glass argues that Cocteau’s works are about human creativity and transformation.  The symbolism in La_Belle_et_la_Bête is the story of Glass’s life.  The rose in Cocteau’s movie symbolizes beauty (Glass’s body of work). The key is the method (Glass’s mother). The horse is strength, determination, and speed (Glass’s father). The glove is nobility (Glass’s renown as a composer). The castle is a prison that can only be escaped with love from another (Glass’s three wives, his children, his mentors, and friends). The Mirror symbolizes who you truly are (this memoir of Glass’s life).

This is a nicely written and narrated memoir of Philip Glass; considered by many as the most influential composer of the late twentieth century.