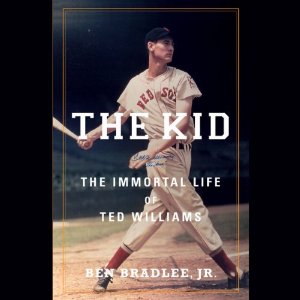 Nearly two-thirds of “The Kid” is about Ted Williams as an extraordinary ballplayer, fisherman, and sports spokesman; the remaining third details Williams’ failure as a husband and father.  Ted Williams marries three times, and divorces three times; he philanders as a husband, and ignores the early lives of his three children; i.e. the first from wife number one; the two others from wife number three.

Ben Bradlee, Jr. pulls no punches in recounting parts of Williams’ life that Ted Williams would possibly regret; that is, if the psychological picture painted by Bradlee is correct.  After finishing Bradlee’s book, one believes Williams would lament mistakes made in his family life.  Williams’ drive for perfection and fragile self-confidence left little time for a wife’s needs, or a child’s parenting.

The price of Williams’ obsession for “being the best” is three divorces, an older daughter that rebels against convention, a son that feels entitled, and a daughter who idolizes, fears, and desires her father’s attention.  All of Williams’ wives are beautiful but a handsome husband with a beautiful wife is shown by Bradlee’s story to be a small part of a happy marriage.  Bradlee suggests infidelity, anger, and single-minded focus destined Ted Williams for divorce.

Williams seems only able to maintain a relationship with a woman who tolerates his imperfections; not as a sycophant, but as an ally; i.e. a woman who complements his strengths and accepts his weaknesses.  Only one woman, whom he does not marry, fulfills that description; i.e. his lifelong admirer, Louise Kaufman.

Bradlee exposes raw facts about Williams’ children.  His oldest child, Bobby-Jo, is committed to a psychiatric ward for mental instability, is released, gets married, philanders, becomes an alcoholic, has two children, divorces, and is disowned by Williams.

BOBBY-JO WILLIAMS FERRELL AND THEN HUSBAND MARK IN 2002. (As his first child, Bobby Jo, flirts with insanity, Williams provides financial support but very little personal attention.  At the end of his life, Williams removes Bobby Jo from his will, except for a $200,000 life insurance annuity. )

Williams only boy, John-Henry, is characterized as a thief that steals his mother’s paintings, borrows money against Ted Williams’ name (without his knowledge), fails to pay it back, and lies about it.  John-Henry trades on his father’s reputation as though he is entitled.

Bradlee tells a story of John-Henry’s selling Ted Williams’ signed memorabilia and then brag about his ability to forge his father’s name.  Claudia, John-Henry’s sister, refuses to believe John-Henry forges their father’s signature.  She chooses to make her own way in life by living abroad, learning French and German, and establishing her own identity without the influence of her father’s reputation.

Late in Williams’ life, Bradlee shows Williams expresses love for John-Henry and Claudia but, in the progress of their maturity, they assert their independence either in self-interested affection or rebellion.  Fatherly influence in his children’s early life seems limited.  William’s way of living life and his acquired wealth seem his most pronounced paternal influences.

Bradlee infers Williams had little time for his children until retired from baseball.  Even then, professional fishing took the place of fatherhood; at least, until much later in Williams’ life.  As an example of William’s love for his children, Bradlee notes Williams proudly attends a college graduation ceremony for his son and sheds prideful tears for John-Henry’s accomplishment.  Later, it becomes known that John-Henry did not really graduate.  He is 3 credits short; e.g. one of several deceptions by John-Henry that are forgiven or discounted by Williams.

Bradlee savages John-Henry’s reputation by inferring that, though he loves his father, he reeks of dishonesty, feels entitled by paternity, and tarnishes Ted Williams’ fame and name.

Bradlee’s biography of Ted Williams ends sadly with the picture of a ravaged legend that appears to have sacrificed too much to become the greatest hitter in baseball.  Bradlee shows Ted Williams as a towering sports figure but a tiny, unimpressive husband and father.