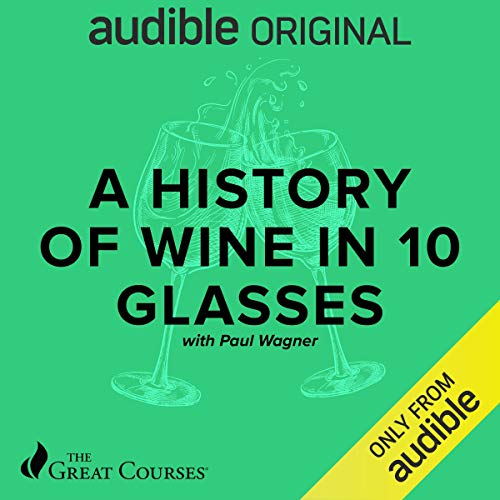 A History of Wine in Ten Glasses

“A History of Wine in Ten Glasses” is a journey around the world of wine.

Paul Wagner is a wine instructor at (where else?) Napa Valley College.

There are several revelations about wine for us amateur wine drinkers.  Thomas Jefferson tried and failed to create a good wine in his home state of Virginia.

Jefferson’s failure is related to a grapevine disease in Virginia’ soils that attacked the roots of plants he brought with him from his diplomatic mission in France.  The root disease is discovered after Jefferson’s death.  Once the disease is diagnosed and treated, Wagner notes Virginia began producing some fine wines.

Wagner dates the production of wine back to 6000 BC in what is now known as Georgia.  Some would dispute that and suggest China had a rice and grape mixed fermented wine in 7000 BC.  Others suggest Iran may have been the origin of the first wines on the the Persian Gulf.  In any case, wine has been with us for centuries.

Wagner argues the Roman Empire is the primary disseminator of the art of wine making.

Rome’s conquest of countries surrounding the Mediterranean spread wine making throughout the known world, sometime between 27 BC and 476 AD.  Even today, the greatest wine volume comes from Italy with France and Spain, the second and third biggest producers

More than ten glasses are identified by Wagner, but the primary libations are from Italy, France, Spain, U.S., Australia, Greece, South Africa, Chile, Argentina, and Germany.  However, Wagner takes side trips to smaller countries like Portugal and New Zealand.

Having traveled to some of these countries, his assessment of their wines seems spot on. Interestingly, his assessment of Chile’s inexpensive Malbec is a favorite of mine. In Italy, the selection of wine at dinner seems the simplest of all decisions.  Rarely is red wine in Italy served that is too bitter or too sweet.  Retsina in Greece is a horrible drink but adding water makes all the difference.  Retsina remains an acquired taste but with water it becomes palatable. Traveling to Argentina and New Zealand confirms Wagner’s assessment of the quality of their wines.

The idea of adding water to wine is a surprise but Wagner notes added water was often the habit of early wine drinkers. (Of course, watered wine is common in religious ceremony.)

Wagner also notes that a pinch of salt can smooth the acidic taste of an inexpensive wine.  Potassium chloride, not salt, is what is recommended by some wine connoisseurs.

A surprising note by Wagner is that German and New Zealand wines are tightly controlled by a labeling system to assure the quality of their wine.

Wagner reports on Germany’s and New Zealand’s precise label certification. One suspects precise wine labeling is a characteristic of the precisionist culture of Germany.  However, New Zealand’s labeling is a result of some Marlborough wines that were contaminated by runoff from lumber harvesting activities in 2005.   Both countries labeling assures the quality of their wines.  Undoubtedly, there is a concomitant cost for the right label.

Wagner lives in Napa Valley and, not surprisingly, suggests many of the best wines in the world come from Napa Valley’ vineyards.  Blind wine testing in Paris confirms his opinion.  What he says is true about many Napa Valley wines, but prices of those great tasting wines are often higher than many can afford.

“A History of Wine in Ten Glasses” is a nice introduction to the vagaries and mysteries of wine selection. For we amateurs wine selection remains hit and miss because it is only our personal taste and affordability that matters.