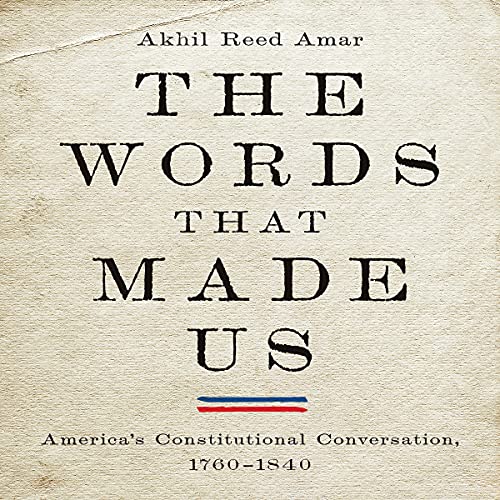 The Words That Made Us: America’s Constitutional Conversation, 1760-1840

“The Words That Made Us” spins history in ways that may offend some historians.  Akhil Amar reveals interesting historical facts that arguably diminish the reputations of Thomas Jefferson, John Adams, and James Madison.  On the other hand, Amar bolsters the legends of Benjamin Franklin, George Washington, and Alexander Hamilton.  Along the way, Amar offers praise for lesser-known visionaries like John Jay, Edmund Randolph, John Marshall, and Joseph Story.

Thomas Jefferson and James Madison are characterized as unrepentant slave holders who form a close friendship that reinforces the human stain of American slavery.  Both are characterized as apologists for slavery who purport to write and support equality while politically endorsing and promoting American expansion of the slave trade.

Amar’s greatest praise is for Washington.  Washington is noted to have been a steady influence on the drafting of the American Constitution. His experience in the revolutionary war exposed the inadequacy of the Articles of Confederation. Washington clearly understood the importance of a national government for a proper defense of the colonies. His reputation and actions taken during the revolution were well known to the framers of the Constitution. Without having to take a public stance, Washington exemplified what had to be done to correct the weaknesses of the Articles of Confederation.

Though Washington is a slave holder and acted as most colonists of his time, he emancipates his slaves upon his death.  However, Amar notes Washington, in his time, pursued his fugitive slaves and sold them when they were captured.

Amar’s peon to Franklin is for his belief in science, experiment, and enlightenment.  Franklin consistently promotes American independence from England in Parliament, in France, in local American meetings, and in every public forum he attends in his era.

Franklin had a point. The test of the Supreme Court on Roe V. Wade will be about words used to provide abortion rights to women. Is the Supreme Court’s decision before the truth or an error? Is abortion a political or human rights issue?

Though initially a slave buyer and holder, Franklin quits the slave trade and becomes part of the American conscience that abhorred slavery’s inhumanity.  Amar’s research reveals Franklin’s last essay, one month before death, satirically attacking slavery and unequal treatment of non-white Americans.  Amar implies Franklin’s advanced age is the only circumstance that prevented him from being more influential in the implementation of the American Constitution.

Washington is the Cincinnatus of American history.  He eschews power in the interest of a Democratic nation-state.

Washington is characterized by Amar as a wise surrogate father for many, particularly the brilliant Alexander Hamilton who is too volatile to act as a prudent manager of public affairs.  Washington brings  out the best in those who offer ideas that promote and build the colonies into one Nation.

Duel between Hamilton and Burr from which Hamilton dies.

Amar channels and re-enforces Hannah Arendt’s analysis of revolution.  Amar argues the American revolution’s success is based on careful preparation of American colonists.  Long before Amar’s book about “…Words…”, Arendt explains in “On Revolution” that lack of citizen preparation is why France’s revolution fails and America’s succeeds.  Amar’s research clearly reinforces Arendt’s observations.

Arendt argues there is no preparation for French citizens to become a Republic that rejects monarchy.  As a result, France experiences anarchy, heedless bloodshed, and democratic failure after their 1789 revolution.

In contrast to the French revolution, citizens of the American colonies are psychologically and politically prepared for a nation-state Constitution before its writing, adoption, and implementation.

Colonial Americans listen to and debate many reasons for creating the Constitution that places man-made laws above the nature of man.  Proliferation of pamphleteers, newspapers, and town hall meetings prepare both literate and illiterate colonists for revolution.  Blood is shed in America before, during, and after the 1776 revolution but Amar explains how and why 13 independent colonies agree to become a nation-state in 1789.  In Amar’s opinion, it is the result of “ The Words That Made Us”, and the men who spoke, wrote, and lived them.

Amar suggests accomplishments of Jefferson, Adams, and Madison are diminished for different reasons.  Jefferson and Madison are slave holding Virginians who distort the truth of their words about equal rights for all Americans.  Amar suggests Jefferson lies about his personal life and exaggerates his role as the sole source of the written Declaration of Independence.  Jefferson had little to do with the final adoption of words in the American Constitution while becoming a strong advocate for States’ rights at the expense of national unity and emancipation.

Madison is acknowledged as a diligent advocate and negotiator in the creation of the American Constitution.

However, Amar notes Madison’s change of heart about states rights as he ascends to political office as the 4th President of the United States.  Amar suggests Madison’s change of heart is related to his fellow Virginian’s (Jefferson’s) concern about abandonment of equal representation in Congress based on the 3/5s’ clause that allows slaves to be counted for congressional apportionment.

Amar vilifies John Adams for long absences from America in his role as Ambassador to France, the Netherlands, and England.  Amar argues Adams’ discussions about the course of events in America relies on the classics of the Greek polis more than the opinion of colonists of the current day.

Amar suggests Adams’ loss of touch with colonists’ opinion distorts his judgment.  Amar notes Adams’ proclivity for self-aggrandizement in his role as a revolutionary.  As the 2nd President of the United States, Adams’ ego leads him to the Alien and Sedition Act that jails and fines Americans for criticizing his Presidency.  Amar notes that Adams fails to get a second term, in part because of his over weaning ego but also because of secret political machinations of his professed friend, Thomas Jefferson.

To Amar, appointment of John Marshall as Chief Justice of the Supreme Court redeems much of Adams’ reputation.  Amar explains even Adams expresses a belief that the best thing he did as President was to appoint Marshall.

Marshall establishes the Supreme Court as a powerful third branch of the federal government.  By the same token, Amar infers appointment of Story to the Supreme Court by Madison somewhat redeems Madison’s reputation as 4th President of the United States.

In contrast to Adams, Madison is elected for a second term.  However, Amar suggests Madison is too beholding to Jefferson to be an independent thinker and actor.  Amar believes Madison’s selection of Story for the Supreme Court gave balance to the Court.   Story is not anti-Jefferson but believes states rights do not abrogate Constitutional rights or condone singular State secession.

Though Story is not Madison’s first choice and not a favorite of Jefferson, he is selected because of his youth and perspicacity.  Amar suggests Madison’s friendship with Jefferson nearly makes the federal government an instrument of Jeffersonian politics.  Justice Story tempers the state’s rights movement attributed to Jefferson’s influence.

Facts of history may be immutable but new facts seem to change history with every new historian’s research.  One is left with a feeling of unease about truth.  “The Words That Made Us” are also words that unmake us.