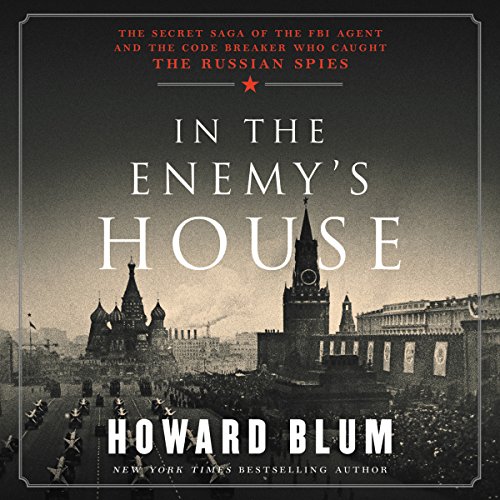 Howard Blum offers some clarity and historical perspective on the infamous Rosenberg spy case.  One might argue it is as much a revision of history as a clarification.  Blum accesses historical files not available in the past to write this book.

These files explain how a Russian spy network was set up, who the agents were, why and how American collaborators were recruited, and the way information was transmitted.

Though the Rosenberg’s may be guilty of espionage, their motive appeared ideological, not economic.  Blum raised the question whether the Rosenberg’s betrayal of America warranted execution.

“In the Enemy’s House” reveals some facts about the halcyon days of the FBI.  A listener finds how FBI agents are chosen, the internecine conflicts that occur when investigations go awry, and how difficult it is to live an agent’s life.

FBI agents are chosen from the general public.  Some may be highly educated, others less so, but all are patriotic, loyal, and committed to American ideals and pursuit of truth.  They are subject to judgement errors in their personal lives, their suspect’s lives, and in their understanding of the truth. They, like all human beings, make mistakes.

Expertise in the field for FBI agents varies.  The example is in the way suspects are followed, how long suspects are tracked, and how suspects are questioned.  As in all life’s endeavors, some are better than others in doing their jobs.

The isolation of agents and the long hours of suspect’ investigations have an impact on personal lives.  Like police work in general, stress is put on family relationships.  In the era the author covers, being married makes a wife a potential liability because of inadvertent disclosure of classified information.  Blum notes that Robert Lamphere, the principle agent in the story, is personally warned by Herbert Hoover about disclosure risks because of marriage’ intimacy.

Lamphere joined in 1941.  In 1945, he is assigned to the Washington, DC office to investigate Soviet atomic espionage, particularly regarding the Manhattan Project.  In 1947 he is assigned to supervise Soviet code breaking and is introduced to Meredith Gardner, who is considered by many to be a linguistic genius.

Meredith Gardner (working among mostly women in the cryptographic Arlington bldg) provides leads to the FBI that reveal two of the most famous names in communist espionage history, the Rosenberg’s, and Karl Fuchs. Gardner dies in 2002.

A looming issue in Blum’s history is the decision to execute the Rosenberg’s for spying for the Russians.  Blum tells the story of an FBI investigation of Russian espionage, code name Venona.  Russia’s spy network recruited western scientists and ideological converts who believed communism is the future.

Blum describes “Operation Enormoz” as a Russian spy network that recruited Julius and Ethel Rosenberg, and Karl Fuchs to pass information about the nuclear bomb to agents of the U.S.S.R.

The judge in the Rosenberg case warranted execution for both Julius and Ethel Rosenberg. The judge reasoned, with the advent of the Korean war and communist China’s invasion of the northern peninsula, the Rosenberg’s gave license to Americans who might betray their country.

An FBI agent and a brilliant linguist expose the Russian spy network in America by deciphering coded messages. The agent and linguist could not provide evidence that might have exonerated Mrs. Rosenberg because the Russians did not know their coded messages had been cracked.  If the evidence the FBI agent had were revealed, America would have lost a critical source of intelligence.

One of the greatest surprises in Blum’s book is that the spy network that led to Stalin’s atomic bomb has little to do with financial bribery.  It had more to do with the success of communist propaganda.

In the internet age, Russia’s success in the 1940s suggests how dangerous Russian interference in American elections is in the 21st century.

Blum touches on growing communist hysteria gripping America after the war.  As history books reveal, Stalin tries to thread a needle by entering an alliance with Germany to expand the Russian empire and avoid a ground war with Germany.

Stalin realizes his mistake in 1941 when Germany invades the U.S.S.R. Stalin is compelled to join the Allied Powers against Germany.  Both Americans and Brits are suspicious of Stalin. However, Stalin’s change in sides becomes critical to the outcome of the war.

The Russian army is the only effective fighting force on the eastern front.  Russia is estimated to have lost 16,825,000 civilians and soldiers in WWII.   The WWII’ casualty estimate (both Allied and Axis powers) is 60,000,000.  If these estimates are correct, over 20% of WWII casualties were U.S.S.R. soldiers and citizens.

By any measure, the eastern front and Russia’s fight with the Germans was critical to Allied success in WWII.

Some Americans were sympathetic to the ideological goals of Russian communism.  The truth of Stalin’s Russian gulags and the KGB were generally unknown to many Americans before, during, and immediately after the war.

Some civilians were seduced by communist propaganda to become tools of a Russian spy network.  Blum recounts the two most notorious Russian spy’ incidents.  Blum tells the story of the discovery and prosecution of the Rosenberg’s and an British scientist named Karl Fuchs.

Klaus Fuchs (1911-1988, served nine years in prison for providing theoretical information on nuclear weapons to Russia in the 1940s.)

America’s realization of the Russian spy network’s existence became widely confirmed with Russia’s detonation of its first atomic bomb in 1949.  This is during the McCarthy era when Russian spies were alleged to be under every bed and in every government agency.

President Truman initially did not believe the Russian’s had the scientific capability to create the bomb.

But the facts prove otherwise.  In one sense Truman may have been right.  Russia’s atomic bomb success does not strictly come from Russian scientists. Stalin creates a world wide spy network to steal other countries’ scientific work.

The point is science is a universal pursuit.  (After all, America used Wernher Von Braun to accelerate experiments in rocketry that led to America’s moon landing in 1969. This is the Von Braun who created Nazi Germany’s V-2 rocket program that terrorized London.)

What is surprising to America is a nuclear detonation by Russia, only four years after Hiroshima.  Blum suggests Russia could not have done it in such a short time without stealing American and British scientist’s work.  On the other hand, Blum infers Russia would eventually succeed in creating a nuclear bomb, without stolen scientific documents.

As most will recall, trade secrets have always been an issue in international trade.  In the past, Japanese, South Koreans, and now Chinese are accused of stealing American trade secrets.  Of course, weapons of mass destruction are a more serious threat, but the principle is the same.

All nations seek economic and social advantage, with science as a universal pursuit.

“In the Enemy’s House”, there is a nagging feeling that execution of the Rosenberg’s was wrong. The inference is that if all the facts were known, the Rosenberg’s execution would have been commuted to a term in prison. Blum’s argument is not particularly compelling when taken out of the context of its time. However, considering no one else was executed for treason in the Venona investigation, the Rosenberg execution seems unjust.