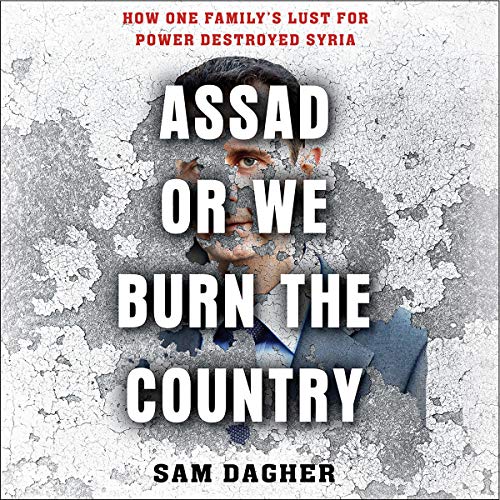 Assad or We Burn the Country

Humanity is at war with itself.  Sam Dagher’s examination of Syria and the Assad government exposes the depth of humanities self-immolation.  Bashar Assad’s atrocities in Syria represent the indecency of power and money in the hands of autocratic leaders.  Autocrats are never exactly alike but each is corrupted by money and power.

For Syria’s atrocities, every country in the world is guilty.  All are guilty because of apathy, support, or complicity. Dagher spares no one.  America, Russia, Turkey, France, Great Britain, Iran, Syrian generals, and indigenous Syrian leaders are complicit in the slaughter of innocents.

SOME SAY AS MANY AS 500,000 SYRIANS HAVE BEEN MURDERED WITH OVER 11 MILLION NEEDING EMERGENCY AID.

Hafez first son is groomed to takeover after Hafez’s death. Bassel was a Syrian engineer, colonel, and heir apparent but he dies in a car crash before Hafez’s death.

Seated are Hafez and his wife Anisa Makhlouf. From left to right in the back row are Maher, Bashar, Bassel, Majid, and Bushra.

Dagher paints a picture of a feckless son of Syria’s deceased brutal dictator.  Bashar al-Asaad assumes power as President of Syria after the death of his father. He is characterized by Dagher as an effete leader with poor leadership skill who inherits a job for which he is ill qualified. (Bashar graduated from medical school in 1988 and worked as a doctor in the Syrian army. He had little military training.)

Dagher suggests Bashar inherits money and power with the sole purpose of aggrandizing himself and his family.  Political, military, and economic wealth and power are bequeathed to Assad family members. Syrian money and power rest with relatives ranging from distant cousins to the President.

Dagher notes that Bashar uses his power and position to order imprisonment, torture, and murder of anyone opposing him. Dagher suggests Bashar sleeps with any woman he wants (married or not). In the mean time, he, his wife, and family live in isolated luxury.

With Bashar’s inherited money, power, and position, he rewards his family, bribes his generals, arrests, tortures, and murders his opposition. To complete Dagher’s picture, he notes Bashar fawns on world leaders who socially or militarily support his rule.

Dagher reports on Bashar’s murder of Syrians.  Bashar is shown as a vengeful leader playing one faction against another to maintain his power and position.

Religion is used as a tool to hide Bashar’s intent to remain in power.  Bashar paints himself as a protector of Christians from Muslim fanatics when his real motive is to cover brutal treatment of Muslim believers.

Bashar is shown to hide behind terrorism preached by Dash (aka ISIS) to justify gassing of his own people.  Dagher shows Bashar’s duplicity when he encourages Russian and Iranian intervention when his own people will not defend his regime.  Every country, including America, has their own agenda in the Syrian war.  Syrian war victims are fertilizer for Bashar’s ambition.

There are many complicit stories about America in Dagher’s exposure of Assad’s cruelty.  President Obama’s red-line statement about use of poison gas with no response from America; President Trump’s support of Russian intervention in a war that uses chlorine bombs to kill Syrian people; Turkey’s support of Bashar in return for repatriation of Kurdish territory; Iran’s intervention in Syria to put down Dash in return for political support from Bashar. Abu Bakr al-Baghdady-once a compatriot of Bashar and then the leader of Dash (Isis).

Though Obama faced a great deal of criticism for his red-line statement in Syria, his decision not to respond militarily was correct. It is up to the Syrian people to decide what they want to do with the Assad administration.

Dagher paints a frightening picture of Bashar and his wife.  It is a picture of self-delusion that endorses murder of their own people.  Bashar and his wife live in luxury while the Syrian people are murdered and starved.  Dagher contrasts Bashar’s wife’s placation of Syrian mothers with Syrian army atrocities. It reminds one of the French Revolution when Louis the XVI, and Marie Antoinette live in luxury while the public starves.

Asma al-Assad is the First Lady of Syria.  Born and raised in London, a graduate in computer science and French literature from King’s College.

Asma supports her husband’s atrocity.  She sees it as a justified means to modernize Syria.  A cynic would suggest her justification has more to do with Assad wealth and privilege than modernization.

Raslan’s faces trial in Koblenz as the first court proceeding against a senior member of the Assad regime. Raslan is one of two Syrians being tried for crimes against humanity. How long before Assad has to face the same fate?

The tragedy of Syria is graphically portrayed in the new television series “Transplant”.

On the one hand it tells the story of highly talented Syrians who are compelled to leave their home country. On the other, it reflects on the hardship faced by immigrants in the U.S. that are struggling to reestablish their lives.

Humanity is at war with itself.  There seems no end to violence in the world.  What is the solution?  Neither real-politic nor “let it be” answer the question.

One thought on “HUMANITIES SELF-IMMOLATION”