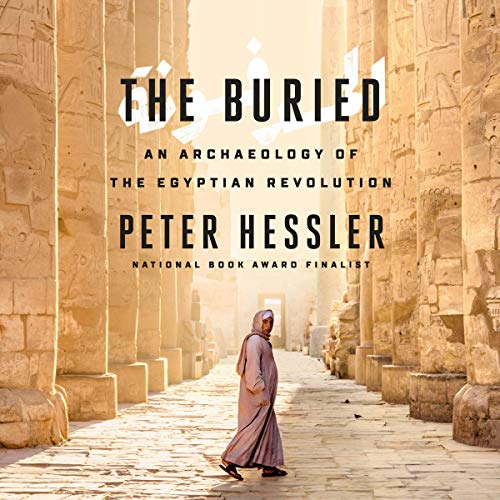 The Buried-An Archaeology of the Egyptian Revolution

Peter Hessler chooses to move from China to Egypt just before the 2011 Egyptian revolution.  He, his wife, and twin newborns live in Egypt for five years.

Hessler looks at Egypt through the eyes of an American who lived in both China and Egypt as a reporter.  His perspective melds Chinese and American acculturation with interesting incite to Egypt’s history, language, and politics.

Egypt is a fascinating country for anyone who has visited or read about its ancient civilizations.  With brief comments about Egypt’s historic monuments and museums, Hessler touches the culture of modern Egypt.

Hessler notes the extraordinary ability of Egyptians to hold two opposing thoughts and adjust behavior to accommodate both beliefs.  On the one hand, there is a sense of “let it be” when minor or major events occur in the lives of modern Egyptians.  On the other, there is a history of autocratic Egyptian rulers who insist on strict control of society.   In view of the many non-Egyptian’ governments after the Pharohs, it comes as no surprise that Egyptians are adaptive.

Sadat, Mubarak, & Nasser were military dictators before the election of Morsi who is deposed in the revolution by today’s military leader, Abdel Fattah el-Sisi.

Hessler comments on the ability of Egyptians to learn languages at varying ages of maturity.  Language skill is the lingua franca of the ability to adapt.

From ancient times of the Assyrians, Persians, and Greeks; to more modern times of the Ottomans and British–Egypt remains Egyptian despite their adaptability.

Hessler offers an understanding of Egypt through the eyes of its citizens.  He recounts the tumultuous relationship of an entrepreneurial garbage collector and his wife.  The garbage collector is illiterate.  His wife can read and write.

The garbage collector is in his 30s when he marries his 18-year-old wife.  Their marriage leads to three and then four children.  The garbage collector is exiled from his children with the threat of divorce initiated by his conservative wife.  His wife follows Egyptian culture in covering her face but rejects some of the discriminatory aspects of a patriarchal society.

Hessler’s garbage collector is a great source of information about Egyptian culture because of the details he knows of other lives based on what Egypt’s citizens throw away.  The collector is scrupulously honest about the garbage he collects.  When he finds something in the trash that has value he returns to his customer.  It is a matter of pride; stoked by belief in a cosmic or religious wheel in his mind that tells him what is right.  However, the wheel seems to stop when it comes to relationship with his wife and children.  This leads to what Hessler suggests is a fundamental flaw in modern Egypt; i.e. women’s inequality.

Because the collector’s wife knows how to read and write, she files an appeal to the court to strip her husband of his house and property.  She files for divorce but recants after finding the consequence of such action would make her and her children destitute.

Surprisingly, their tumultuous relationship becomes less combative as their life together matures. Their personal trials seem a paradigm of Egypt’s “let it be” and autocratic culture.

Hessler reports on the ponderous, corrupt justice system that both aids and thwarts the intentions of married couples seeking help.

Women are discriminated against based on their sex in Egypt.

Women are raised to believe their role in life is to have and raise children, and take care of their husbands and families.  Girls are not afforded the same educational opportunities as men.  Women are expected to sacrifice their entrepreneurial right to a job when they are married.  Hessler notes female children are routinely genitally mutilated. This is a tradition based on a belief that sexual pleasure and desire are a threat to society. Hessler compares the torture of genital mutilation to the Chinese tradition of binding women’s feet.

Hessler compares Chinese with Egyptian culture to expose the consequence of sex discrimination.  The potential of women’s contribution to the economy in Egypt is eviscerated by its culture of discrimination.

In an adults most productive years, Egyptian housewives cannot work for pay outside of the home.  If a woman has a good job, she is expected to relinquish it when she is married.  In contrast, Chinese women are full participants in the economy.

Parenthetically, Hessler notes Egyptian homosexuals are persecuted for their sexual preference.  The irony of that homosexual persecution is in Egypt’s patriarchal culture that discourages social contact between the sexes.  Putting aside genetic predisposition, without social contact with women, male relationships become the only acceptable form of intimate relations.

Egypt’s demonstration against a crackdown on LGBT’ rights.

Hessler’s book is interesting because of his firsthand knowledge of the revolution that removes Morsi from the Egyptian Presidency.  In many conversations with Egyptian residents, Hessler notes the weakness of the Brotherhood in Egypt; both in number and in qualification for political leadership.

Hessler contrasts the military with the Muslim religion of the Brotherhood.  The military has a long history in modern Egypt.  The tradition of strong leaders has an even longer history.  The Brotherhood is characterized by strong leaders who only press religion; without understanding the nature of society that desires order, safety, and economic opportunity. Order, safety, and economic opportunity are a “good despot’s” alleged intent.

Mohammed Morsi (Fifth President of Egypt for 1 year until removed from office by General Abdel Fattah el-Sisi. Morsi dies of a heart attack in 2019.)

Hessler shows the Brotherhood as an association of religious believers that have little organizational skill.  They are not educated to lead.  They are educated to worship.  That educational limitation exhibits itself in Morsi’s weak government.  Egypt flounders economically with the election of Morsi.  One can argue it is still floundering under el-Sisi but Hessler shows the military is more prepared to lead based on the tenants of worldly desire rather than religious worship.

Hessler explains there are many conspiracy theories surrounding the Brotherhood’s influence in Egypt. Their small numbers and inept management skill seem unlikely to create a successful uprising in Egypt. The Brotherhood’s revolutionary impact seems symbolic more than real. However, one realizes Russian Bolsheviks were a small minority in 1917.

Hessler notes that el-Sisi’s popularity is diminished by missteps in funding infrastructure improvements at the expense of more direct economic need.  He cites the expansion of the Suez Canal as an example of a prudent long-term aid to the economy but a neglect of medical services, justice reform, and housing needs for today’s general population.

There is also the issue of repression by el-Sisi.  Hessler recalls the incident of a tortured, and then killed, foreign student that criticizes the current government.  The author notes that el-Sisi’s defenders suggest the murder was an accident caused by young and inexperienced supporters of el-Sisi.

In recalling my personal trip to Egypt in 2019, the Brotherhood is a big concern of the government. Tourism is a big industry for Egypt. That industry nearly dies with the election of Morsi. Some Egyptians feel something is getting done with el-Sisi; while no economic progress happened with Morsi.

Hessler offers a glimpse of the hardship Egypt faces in the 21st century.  His observations are at a local level of Egyptian society; not at the obscure level of a thirty-day tourist.  Time will tell if el-Sisi is the answer to Egypt’s failing economy.

Sisi is acknowledged by Hessler as a good communicator.  Sisi is truly an Egyptian focusing on his perception of what Egypt needs now; not the religious salvation of the eternal.  The biggest criticism of Egypt’s leadership in Hessler’s book is the unequal treatment of women.  There seems no action taken by el-Sisi to address that reality. One wonders if the economy is likely to grow quickly enough to avoid another revolution without gender discrimination reform.