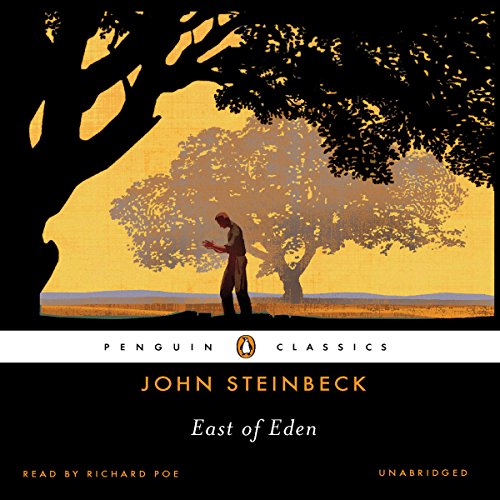 “The Heritage Foundation’s database includes 1,296 ‘proven instances of voter fraud’ out of the hundreds of millions of votes cast going back to 1992. Of those cases identified, 1,120 resulted in criminal convictions. What rational human being would commit voter fraud and how likely is a fraudulent vote likely to change the outcome of a national election?

“East of Eden” is a judgement on the nature of humanity.

In “East of Eden”, every human being has a choice; the choice to be good or evil. An inference in Steinbeck’s “East of Eden” is that individuals choose who they want to be regardless of economic circumstance, or genetic inheritance.

“Black Lives Matter” questions that premise in the face of institutional racism.

Mixing and matching diverse personalities are a part of Steinbeck’s oeuvre.  An audio book listener sinks into the first few chapters of “East of Eden” thinking they know how the story ends.  However, each new character reveals some new facet of humanity that turns and twists the story.

Steinbeck’s anti-hero, Cathy Ames, seems destined for execution; the Trask family for tragedy, the Hamilton family for peace and prosperity, and Chinaman Lee for Saint-hood. What happens is only partly expected.

Steinbeck invents characters that show the best and worst of humankind; without making life a morality play.

A listener cares what happens to Steinbeck’s characters.  The beauty and transcendence of Steinbeck’s writing informs; sometimes intimidates, those who think they know something about life.

Children of the world are raised in the best and worst conditions of existence.  Children are raised in the happiest families, the saddest families; in enslaved minorities, in blue collar majorities, in one parent, two parent and no parent families. Children die or mature to become someone or no one, but Steinbeck infers chance and choice are theirs to follow.

Steinbeck raises questions about life and how one lives it.  Steinbeck writes a story showing that becoming oneself is influenced by genetics and environment but not determined by either. In “East of Eden” life’s journey is made of human choices and chances.

The most evil character in “East of Eden” is Cathy Ames.  She comes from a two parent “Ozzie and Harriet” family that owns a relatively successful leather tanning business.  Cathy Ames is loved by her family.  She is an only child that is doted on by her mother and loved by her father.  Cathy Ames chooses to murder her parents, and merry an unsuspecting man.

A good-hearted, trusting man–Adam Trask marries Cathy Ames. The Trasks have two children– twin boys who seem to reincarnate differences in their parents. The boys names are Cal and Aron with each seeming to take a different path in life.

Cathy Ames shoots her husband after the twin’s birth.  She abandons her wounded husband and newly born children. Cathy chooses to become a prostitute and Madam, and lives her idea of the American dream.

Chinaman Lee is the Trask family’s servant. Lee is an outlier observing the American dream with a philosophical belief that good and evil exist in all human beings. Lee views existence of good and evil as a God-given choice; not a fate or pre-ordination. Lee’s wisdom and philosophical beliefs influence the Trask family sons; particularly as their father’s health deteriorates.

One of the most laudable characters in “East of Eden” is Samuel Hamilton.  He is an Irish immigrant that comes to Southern California, and has a past that touches evil. Hamilton flirts with a “Cathy Ames kind” of relationship, but breaks away from its evil influence to become a sage and seer in Salinas County.

Hamilton becomes the patriarch of a big family that is poor in wealth but rich in love, respect, and familial affection.  Samuel Hamilton lives a different American dream.

Lee is a cornerstone character in Steinbeck’s story. Lee’s philosophical belief in human choice is illustrated by Cal’s decision to avoid a life lived like his mother. Cal chooses good over evil after finding and recognizing his mother’s poor choices and their consequences.

Freedom of choice is both a human burden and benefit. Steinbeck implies each person chooses their course in life. Their choices are their own responsibility; not genetics, or economic circumstance.

It is ironic. Trump chooses to bargain with Congress on mail-in voting when the unemployed are suffering from hunger and pending homelessness caused by Covid19′ joblessness.

Exception might be taken in poor communities that have no living wage jobs. In light of Steinbeck’s “…Grapes of Wrath”, one might argue there is a false bottom in belief that economic circumstance is irrelevant. One can certainly choose to be good rather than evil, but the consequence of poverty seems to compel evil.

Theft, like selling illegal drugs, is a way of making a living in poor communities that have no jobs. Both illegal enterprises recruit the unemployed by offering jobs, potential wealth, and identity.

Compelled evil is even more starkly reflected in Richard Wright’s “Native Son”. Is evil strictly a choice? Some would argue environment and genetics compel choice.

One thought on “FREEDOM OF CHOICE”