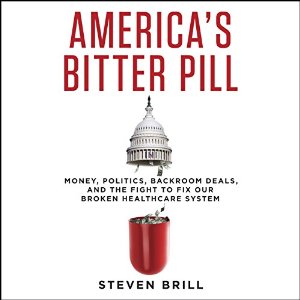 “America’s Bitter Pill” is a policy wonk’s dream and an American citizen’s nightmare.  It reveals the role of money and politics in American government.  Steven Brill overwhelms readers, which are not policy wonks, with disgusting political backroom deals and entrenched private and non-profit interests.  The disgust comes from the distortion of the most important legislation passed by the American’ Federal Government since the New Deal.  Government leaders, private industry, and non-profit corporations worry more about being re-elected or having their pockets lined than providing basic health coverage to the American’ public.

Brill indicts a political process that seems freighted with more venal self-interest than good will.  How can one argue that the private sector through an “invisible hand” is adequately providing health care to a general public in the richest country in the world?  Too many Americans have no health coverage because they cannot afford it.  All one has to do is ask how many Americans do not go to the doctor because they cannot afford the visit and do not have insurance against catastrophic illness.  Even the “god” of conservative economics, Friedrich von Hayek, believed government had a responsibility to provide “…a comprehensive system of social insurance in providing for those common hazards of life against which few can make adequate provision.”

What Brill shows is that the value of high profits to private and non-profit insurance and medical facilities is more important than offering reasonably priced health care to the general public.  What every special interest lobbied for in the Affordable Care Act depended on improving or maintaining profit.  “America’s Bitter Pill”, the Affordable Care Act, is laced with greed.  The Affordable Care Act has extended insurance to more people in the United States than ever before, but it continues to rankle knowledgeable Americans because it is based on the false belief that it will cure an incurable disease, human greed.

President Obama chose the only path he could see to have any chance of passing an Affordable Care Act.  The only voting majority in America’s bicameral Congress that had any chance of success is shown by Brill to be dependent on acceptance by insurance companies, hospitals, the pharmaceutical industry, and ancillary medical service equipment manufacturers.

Even in these troubled times, the messiness of American Democracy bends toward a resolution of intractable social ills.

The momentum for health reform, ecological balance, and equal rights is unstoppable.  No singularly elected American politician will change the direction of that momentum.