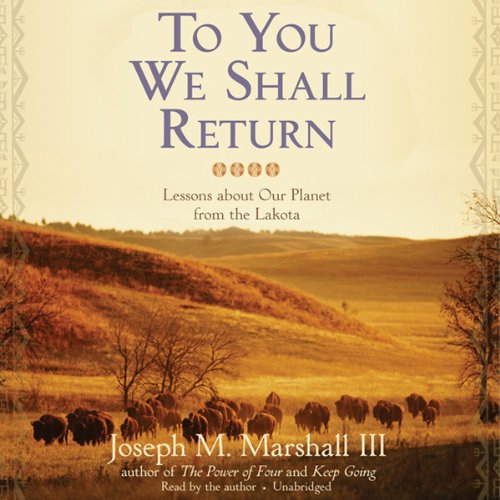 To You We Shall Return

Joseph M. Marshall is a native American Indian of the Lakota tribe.  He argues that humanity must balance economic growth with nature to preserve cultural, particularly American Indian, identity.  The foundation of the argument is his life in a Lakota family and a felt loss of cultural identity.  His recollection is that his family’s life ambition is balancing the Lakota way of life with the natural world.

Marshall creates an argument based on a false dichotomy.

The world has never been a static place.  One cannot dispute balancing change with nature is critical to survival of humans on earth.  However cultural evolution is an integral part of that balance.

Marshall notes his family modified their culture to adjust from hunter/gatherer life to a farming life.

He decries the destruction of his native culture by non-native explorers who, without question, deceived, evicted, and murdered Indians for what foreign settlers believed was a new frontier to conquer and exploit.

But that is not the theme of Marshall’s book.  His belief is that ethnic cultures should be retained by emphasizing balance of nature to maintain the environment in a fragile world.

What is disturbing about the emphasis on balance of nature is the discounting of science that saved many homos sapiens from disease, starvation, and death.

With discovery of the causes of disease, ways for cure, and methods for increasing food production, people’s lives and standards of living were improved.

Marshall recalls an idyllic history of his Lakota family that lived in the wilderness by adjusting their lives to the exigencies of nature.  On a larger scale of life, rebalancing lives of humans with earth’s environment is a never-ending process.  New scientific, political, and social discoveries require cultural adaptation.

Cultural evolution is a consequence of human nature and manufactured law.  Human nature is formed at birth and evolves based on life experience that modifies the psychology of being, human desires, and behavioral traits.  Manufactured law is a social construct based on either authoritarian, socialist, or democratic political ideals and institutions.

Contrary to Marshall’s explanation of the ideal of a culture that is disappearing, some like Norman Borlaug, imply the survival of humanity is dependent on the interplay between human nature, science, and manufactured law.  (Borlaug was an agronomist who found a hybridized wheat seed that saved millions from starvation.)

Knowledge gained through science offers the opportunity to rebalance the relationship between humanity and nature.

Cultural evolution is a part of that rebalancing.  Cultures collide and reform.  Cultures are compelled to adapt.  Over the life of the universe, one presumes earthlings will have one culture, and other worlds will have their own distinctive cultures.

This is not to minimize the monumental loss of identity to the Lakota or any other culture.

The history of indigenous Indian cultural decimation in America is heart breaking in the same way that all human beings have not been treated as equals.

Marshall’s wish for cultural permanence is an unreasonable expectation.  Human nature is a brutal and often unfair quality of being human.  Adaptation by cultures follows Darwin’s path of evolution.  The animal kingdom adapts to its changing environment, or its species dies.