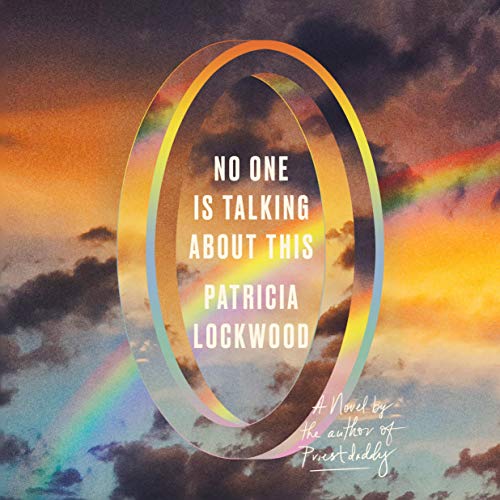 No One is Talking About This

In “No One is Talking About This”, Patricia Lockwood shows mind is life’s portal to the world.

Every human being perceives the world though their mind.  Her book offers three hours of introduction to a mind’s amorphous perception of the world, followed by one hour of clarity.  Lockwood writes three hours of “stream of consciousness” to introduce one hour of personal belief in the sanctity of human life.

The author gives listener/readers a point of view about a subject that, contrary to the title of Lockwood’s book, is talked about by everyone.

Nearly everyone is talking about women’s rights.  She makes a compelling case for limited women’s rights by telling the story of a pregnant woman that finds she has an unborn baby who is affected by the rare disease of elephantiasis.  The unborn baby has a heartbeat but shows the unmistakable growth characteristics of elephantiasis in her mother’s womb.  The State in which the mother lives does not allow abortions.  Whether the State would allow abortion or not is not the story.  The story is the mother’s decision to keep the baby.

In the end, Lockwood’s story implies women’s rights stop at the door of human conception.

Lockwood alludes to many of the trials of having a health compromised baby that will require special care.  She notes the high medical costs that a family may incur.  However, cost is irrelevant in this story because there is an unbreakable filial bond that sustains parents, grandparents, and siblings of the family.  They love this stricken child.  Added to that bond is religion.  In their minds eye (the portal) the thought and action of abortion is inconceivable.

In some families, there is an unbreakable filial bond that sustains parents, grandparents, and siblings.

“No One is Talking About This” is a compelling argument against abortion. The flaw in Kisten Seih’s argument is it is one family’s point of view.  Lockwood implies it is God’s commandment to preserve life.  However, what if God is a manifestation of mind-not the creator and ruler of the universe?  It becomes a question of faith to a believer but a case of reason to an agnostic.

The argument for “a right to abortion” is conceived by some as a singular choice by humans which are a part of nature which, in their mind, is God.