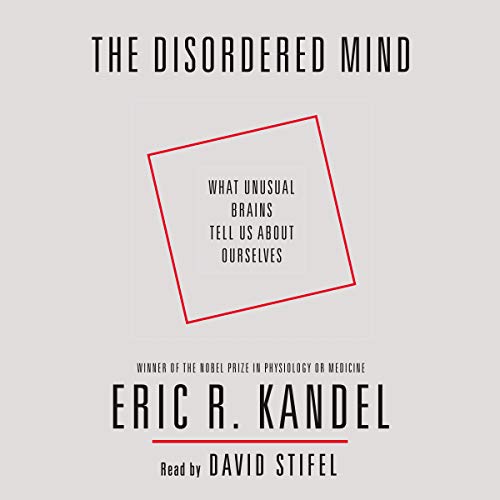 The Disordered Mind (What Unusual Brains Tell Us About Ourselves)

In “The Disordered Mind”, Dr. Kandel offers an explanation of what is known about the physiology of the human brain.  What is thinking?  How does the brain work?  What is consciousness?  What causes brain dysfunction?  What is mental illness? How can mental illness be diagnosed and treated?

Most know there are two distinct halves of the human brain.  What is less well known is that the left and right brain hemispheres conflict with each other.

Kandel explains that right brain activity generates much of human creativity while the left brain is tasked with logic.  It is not that the two halves of the brain never cooperate with each other.  However, regions of the brain frequently interfere with each hemisphere’s understanding of what humans see, feel, hear, and think. With those senses, human thought and action is affected.

Damage or disease of either side of the brain is a proximate cause of psychiatric disorder but the interconnection of the two sides makes diagnosis and cure a hit and miss proposition.  The physiology of the brain is complex and difficult for today’s practitioners. To diagnose or cure symptoms of brain injury or disease requires precise information about location and physiological characteristics of brain function.  Kandel notes that brain imaging has been a boon to understanding how the brain functions and where thought and action originates and initiates, but interconnectedness thwarts precise understanding.

Kandel informs us of symptoms of various brain injuries and diseases and how science searches, stumbles, and recovers to find ways to ameliorate physical and mental disorders caused by brain dysfunction.  He explains how too much or too little of naturally produced chemicals like dopamine and melatonin affect brain function.  Kandel notes how normal behavior becomes unbalanced with excess or diminishment of brain chemistry.

The origin of artist creativity is explored by Kandel.  Kandel implies the dada movement reflects bizarre subconscious images that titillate the public because they resonate with one’s own subconscious.

Artists are exhibiting right brain evocations.  This reminds one of Edmund Munches’ Scream and his note hidden in the painting that says, “Could Only Have Been Painted by a Madman”. Kandel dismisses that characterization of artists.  Kandel suggests they are simply magnifying right brain neural activity.

Kandel notes the progress that has been made in abating, if not curing, psychiatric disorder.  It is surprising to find how many treatments have been discovered accidently.  This is not meant to diminish leaps of science in mapping the brain, or creating medicinal treatments for psychosis and neuropathy but it discloses much of the luck that leads to palliative, if not curative, care.

Kandel notes a fundamental cause of certain psychiatric disorders have been found to be misfolded proteins that negatively affect biological activity and, in some cases, increase neuronal toxicity. This misfolding is considered to be a cause of antitrypsin-associated emphysema, cystic fibrosis, and other maladies.

A somewhat surprising disclosure by Kandel is that physical change of the brain is shown from use of psychotherapy as well as physical or chemical intervention.  Kandel suggests psychotherapy is an important part of treatment for patients being treated with drugs or surgical intervention.  Kandel infers physiological change in the brain can be as consequential with psychotherapy as with drug or surgical treatment.  However, he suggests both forms of treatment offer more lasting success.

There is a lot to unpack in Kandel’s book about “The Disordered Mind”.  Many who read/listen to this book will conclude that treatment of drug addiction and other psychological imbalances need more scientific research and better diagnosis and treatment.

2 thoughts on “MINDING YOUR BRAIN”