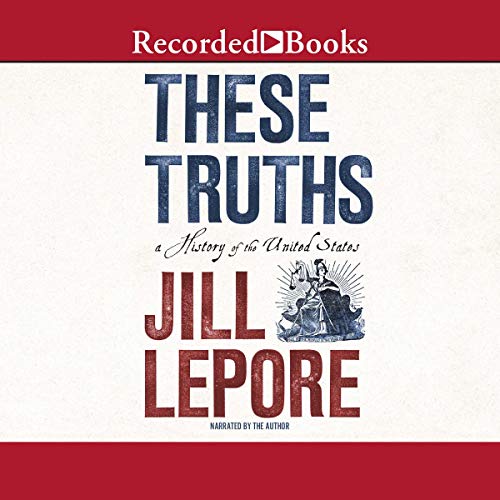 These Truths (A History of the United States)

Jill Lepore offers a view of U.S. history in “These Truths”.  “These Truths” is a review of American politics and its tumultuous history.

What makes “These Truths” interesting is its perspective.  Lepore looks at American history through the eyes of slavery, religion, Indian rights, women’s rights, industrialization, and technology.  Its 29-hour narration is daunting but “These Truths” helps one understand the trauma America is going through today.  Trump is not the first President to roil the waters of American democracy.

The author begins with Europe’s search for a new continent.  One might go back to the 10th century but the substantive beginning for Lepore is the 15th century with Italian, Portuguese, and Spanish exploration. The French, and English governments follow earlier explorers in the 16th with the English culture becoming the bedrock upon which America grows.

Initially, exploration is based on finding new riches for already wealthy countries.  Natural resources were coveted by wealthy European monarchies.  However, as new land is discovered, colonization becomes a way for European countries to expand their empires.

Lepore notes many reasons for colonization.

The first among the many is natural resource acquisition but escape from religious persecution, desire for freedom from government control, and opportunity for economic independence also motivated colonization of unclaimed territory.

The years 1776 and 1787 mark the formation of the United States and its historic Constitution.

With President Washington as the first President of the United States, three branches of government are formed with the belief that a President could never be a King, a Supreme Court could have no power to legislate, and national legislation could only be proposed and written in Congress by representatives of respective States.  Over time each of these Constitutional restrictions are violated.

Some would argue a few Presidents acted as though they were Kings.

At times, the Supreme Court issued Constitution’ interpretations that read like new legislation

As years passed, Congress abdicated much of their legislative work to influential lobbyists.

The American revolution and Constitution set the table for 245 years of political discord, re-definition of powers, and sporadic violence. The storming of the American capitol on January 6, 2021 is somewhat unique but not surprising in view of Lepore’s history of the United States.

Gerald Seib (Reporter for the WSJ, and RNC Debate Moderator)

Gerald Seib in the May 25, 2021 Wall Street Journal suggests the January 6th violent assault on the capitol should be reviewed by a specially appointed commission. He argues that just as the Kennedy Assassination commission dispelled much of the cause and consequence of a singular violent act, a commission on the January 6th assault will dispel public misconception of a heinous historical event.

Jill Lepore argues “These Truths” in the Declaration of Independence and Constitution are mangled by slavery. Lepore argues slavery is as an issue that permeates all the faults of American Democracy.  Lepore implies the idea of human beings as property infects every well-intentioned tenant of the Constitution and Bill of Rights.

In accepting slavery as a God-given, bible-written right, religion is corrupted.

With the persistence of slavery, Lepore argues the door is opened to unequal treatment of Indians and women. The idea of humans as property makes eviction of Indians from their inherited, designated, and stolen land possible.  Eviction led to the Indian’ “Trail of Tears” during the Jackson Presidency.

Words have power and the principle of “all men are created equal” diminishes the role of women. Lepore implies–just as slaves were disenfranchised and subject to their masters, women could not vote and were subject to their husbands.

Industrialization and technology magnify the best and worst characteristics of America’s political history.  Both improve human productivity but at a cost of jobs and economic disruption that exacerbate poverty and hunger. In 2020 and 2021, Covid19 amplifies American disruption, poverty, and hunger.

It is striking to note how many Americans who reinforced the meme “America First” were on the wrong side of history. Woodrow Wilson, Henry Ford, Joseph Kennedy Sr., Charles Lindbergh, William Randolph Hearst, and Donald Trump insisted on “America First” regardless of its consequence.

President Wilson campaigned for President on the basis of staying out of WWI. Joseph Kennedy, Sr. believed American entry into the WWII was unnecessary. He argued that Hitler could be negotiated out of a war as a rational business transaction. Charles Lindbergh was a Nazi sympathizer and anti-Semite even as he was viewed as an American hero. Lindbergh was the first to cross the Atlantic in an airplane. Hearst Jr. and his publishing empire looked at Hitler as a newsmaker and no threat to America. Donald Trump based his campaign for President on the slogan “America First”. He reinforced his belief by starting a trade war and alienating America’s long held European allies.

In listening to Lepore’s history of the United States, one will regard Donald Trump’s rise and fall as a minor chapter in America’s history.  Trump seems a reincarnation of the worst characteristics of American Democracy, but America survives its past.  America remains the best chance for democracies to advance individual rights, economic freedom, prosperity, and the general welfare of its followers.