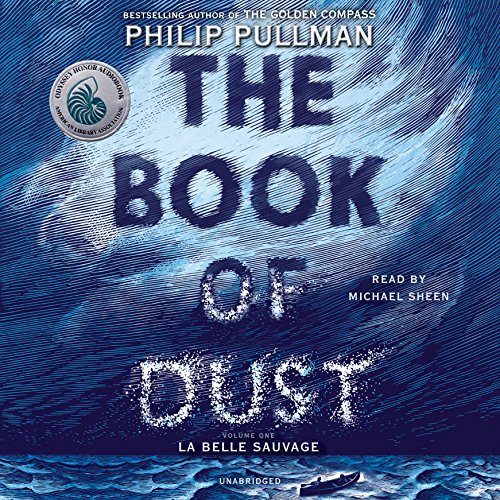 “The Book of Dust” is a surreal story told by a master narrator.  Pullman combines magical fantasy with speculative science.  The drama of Pullman’s story captures your attention with a story about a boy and girl struggling with maturity in a world turned upside down by a disastrous flood. Phillip Pullman’s extraordinary imagination is amplified by Michael Sheen’s oral presentation.

Human nature is on display.  People are not always what they seem.  Every person has an image of themselves and others that is revealed by what they do; not by how they look, or what they think.  Pullman implies there is a presence in each of us that is illustrated by an individualized demon.

In Pullman’s imagination that demon is attached to our being and cannot be separated except by death or extraordinary circumstance.

The demon is like a talking spirit that changes form in ways that reinforce feelings and thoughts of its companion.  It advises, directs, and illustrates contradictions and affirmations in its companion’s life.

Volume 1 of Pullman’s trilogy sets the table for an ongoing story with three principal characters.  Lyra is a baby in Volume 1 but seems destined to be the main character that carries secrets and mysteries to be revealed in future volumes.

Lyra holds a mysterious power as an offspring of an estranged husband and wife who are on opposite sides of a political divide.  One side appears to be autocratic: the other loosely democratic.

Volume 1’s hero is an eleven-year-old boy named Malcolm.  Alice is Malcolm’s fierce companion in a dangerous escape from a mad scientist, a horrendous flood, and an autocratic government agency.  The two young protagonists struggle in their relationship with each other. They have a pact to protect Lyra. Both are pursued by the mad scientist who is determined to murder Malcolm, ravage Alice, and either kidnap or kill the baby.

Pullman’s appeal is partly in the adventure but also in the sprinkling of “dust” that seems to have something to do with quantum unpredictability.

Both threads of Pullman’s story appeal to a reader/listener’s fascination with the adventure and puzzles of magic, religion, and science.  A third interest comes from those who just enjoy well told fictional stories.

The first volume will lure many into the second and third of Pullman’s trilogy.