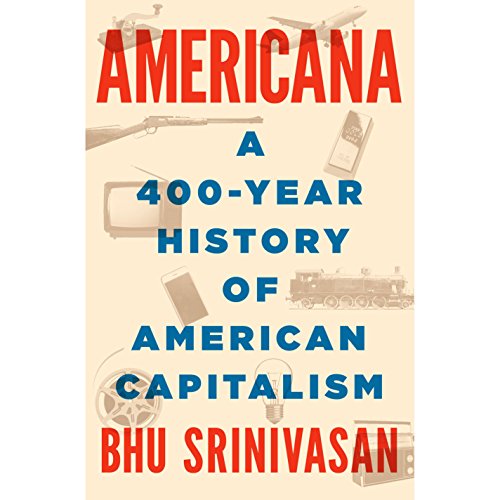 Bhu Srinivasan (Author, American citizen born in India, Emigrated at age 8 to the United States with his mother.)

“Americana” is homage to the muscular success of capitalism in the United States.  It appears it takes someone born outside America to unapologetic-ally endorse the gift of capitalism to the world. It seems Bhu Srinvasan lives the American dream in the 21st century.

Srinvasan “leans in” by arguing libertarian-ism’s strengths outweigh its weaknesses.  “Americana” speeds through the history of great men (because women’s contribution is largely ignored) who settle America in the 17th century.  With the help of English entrepreneurs willing to risk investment in the voyage of the Mayflower, the egg of American capitalism is hatched.

(The Original Mayflower Sailed September 6,1620 and landed on Cape Cod 66 days later, which was 500 miles north of its intended destination in Virginia.)

The investors expect a return on their investment.  They finance the expedition based on an expectation of success from a settlement in Virginia.  The first years of the Pilgrims’ progress is nearly a bust.  The author explains the initial investment is nearly lost but recovered by an agreement among the settlers to buy out their Mayflower investors.  The buyout is a success because the settlers find a ready market for American goods in England; particularly beaver furs which were provided to settlers by native inhabitants.

With growth of the fur trade, new settlers come to America.

The beaver fur business is expanded with new settlers who learn how the Indians ply their trade.  Competition grows and undoubtedly many tribes are shut out of the trade.

This, as in many more stories told by Srinvasan, reminds one of the boon and bane of capitalism.  That is not Srinvasan’s intent, but the effect of competition from acquired knowledge, new technology, and entrepreneurship is repeated many times.  There are winners and losers in the growth of capitalism. What is one life worth?

There is an “end justifies means” theme in Srinvasan’s view of America. This is an attitude reflected by President Trump’s suggestion on March 24, 2020 to re-open America in April.  The reality of quality-of-life improvements in America makes Srinvasan’s, and some would say Trump’s view, a worthy subject of contemplation.  America is the most economically successful nation in the modern world.

Srinvasan glosses over issues of slavery, racism, and corporatism. Trump’s suggestion that America should be reopened for business in April of 2020 is a judgement that suggests ends justify means. The spread and human impact of the coronavirus is unknown.

Many of the harsh realities of a transactional economic system bare down on America with exposure to the coronavirus. Do ends justify the means?

Carnegie, Vanderbilt, Ford, Rockefeller, Morgan, Edison, Westinghouse, Watson, Gates, and Jobs are a few examples given for the success of American Capitalism.

What is missed is the “blood in the water” from changes wrought by these men of steel, automobiles, energy, finance, communications, transportation, and technology.  With each advance in American ingenuity, there is a general rise in America’s standard of living.  Indeed, Bhu Srinvasan himself is a tribute to the success one can have in 21st century America. But, Srinvasan tells only one side of the story.

Homelessness in America is a disgrace.  Rat infested ghettos in large American cities perpetuate poverty and crime.  A deteriorating education system is gamed by the wealthy who neglect what can be done to help the poorly educated.

Corporations have a duty to educate people displaced by technology.  Government needs to move beyond the transactional value of health care to provide basic health services to all Americans.  Environmental degradation needs to be abated before the world’s 6th extinction.

To ignore the price paid by a growing underclass in America, is side-stepped by Srivasan’s “…History of American Capitalism”.

America capitalism can do better.  We are no longer a struggling economy like that which existed in the days of the Pilgrims and later so-called robber barons.

Srinvasan is an excellent primer on capitalism but that is history; not a prediction of a future where homelessness, a deteriorating environment, a failing education system, inadequate health care, and racial injustice are ignored.