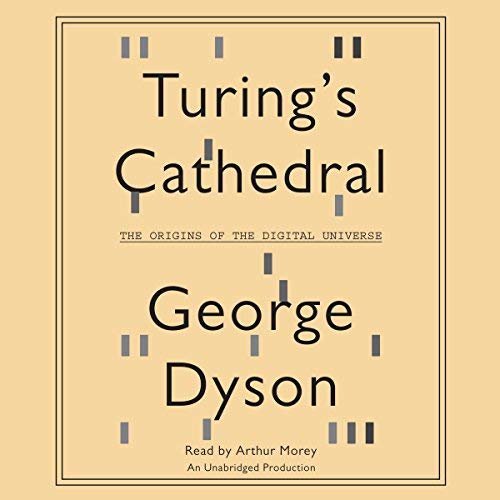 Turing’s Cathedral: The Origins of the Digital Universe

The beginning of one of many Faustian bargains between government and science is revealed in George Dyson’s book, “Turing’s Cathedral”.  Dyson reveals the genius of Alan Turing and other contributors to the computer age.

John von Neumann (1903-1957) A Hungarian-American mathematician, physicist, computer scientist, and polymath, joins the American military/industrial complex before it became known as the “complex”.

George Dyson’s book recounts the confluence of military might and computer invention. The military wants more accurate estimates of ordinance trajectory and damage to improve murder rate. Manual calculation was too slow and prone to error.

With government backing, von Neumann is midwife to the birth of the computer generation.  Presuming von Neumann knew of Alan Turing’s 1936 paper on mathematical logic, he wrote a paper about a universal computing machine. Hired by the government to improve the accuracy of military ordinance, von Neumann works with Oswald Veblen at the Moore School of Engineering in Philadelphia. Von Neumann, and Veblen expand a math and engineering department that changes the world.

To the right is the Moore School of Engineering in Philadelphia–The fruit of the new department’s labor is a vacuum-tube, wire bound, contraption called ENIAC.

Before Eniac, human calculations could not efficiently or effectively determine the course of a flying howitzer shell, or the measured impact of a flying-fortress’ bomb.  What the military needed was a better calculating tool than the single human brain.

John Mauchly (left) J. Presper Eckert (right)–Mauchly and Eckert were the inventors of the first universal computing machine at the Moore School of Engineering.

(There is a controversy over who created the architecture for this machine because von Neumann came to the Moore School of Engineering after Mauchly and Eckert had already begun work on ENIAC.)

Though this is an historical account of the invention and consequence of computer manufacture, listening to “Turing’s Cathedral” seduces one into seeing war and the military as a primary source of technological advance. Science is shown to advance from growth of the military/industrial complex and the destruction of war.

What strikes one’s imagination is how critical government expenditure, particularly the military, is to R and D (research and development) in science.

Interestingly, the requested budget for R and D in 2019 is reduced to $131 billion.

(President Trump is intent on building a wall between Mexico and the U.S.; i.e. not unlike Hadrian’s wall, a first century method of defense. Not what one would call a technological advance.)

One wonders if the computer would ever have been invented without the advance of a horrendously destructive war.  At the very least, war accelerated the invention of the computer generation.

The innate brilliance of Philadelphia’s Moore School mathematicians creates more efficient and effective methods of mass murder. One might argue that the Moore School opened a Pandora’s box. Turing’s, von Neumann’s, Mauchly’s, and Eckert’s theories and inventions open a door to artificial intelligence; i.e. an intelligence beyond human understanding that may improve or destroy humanity.

The first hydrogen bomb explodes in 1952. According to Dyson, one person is killed while monitoring the explosion. He is the first victim of the hydrogen bomb that is 50 times more destructive than the bombs that fell on Hiroshima or Nagasaki.

One wonders, without government, without the military, and sadly, without war, would humankind have reached into the universe in the 1960s?

This is an important book, somewhat difficult to track because of its non-linear presentation, but a valuable insight to a giant step in the history of science.

A monumental gap in George Dyson’s presentation of “Touring’s Cathedral” is the effect of the internet and its ability to disseminate information throughout the world with a click.

Instant communication changes the dynamics of society. The computer age and internet offer a platform to rally the best and worst of society.

One cannot help but be troubled by the source of mankind’s twentieth century leaps in scientific discovery. So many scientific advances seem closely tied to perfection and invention of potential weapons of mass destruction. Dyson inadvertently makes a case for war and the military’s efficacy as an engine of science.

“Turing’s Cathedral” opens a door to artificial intelligence, a two edged sword that can defend or destroy humanity. With the internet, the sword is sharpened.