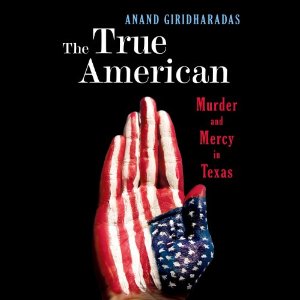 The True American: Murder and Mercy in Texas

Who are we?  What have we become? A deplorable habit of humans is to classify others as either one of us or one of them.

“The True American” is a news reporter’s story of two Texas murders and a wounding.  The victims are people living and working in 21st century America.  By birth, the three victims are Bangladeshi, Indian, and Pakistani. “The True American” is the story of murder and mayhem that tests Texas’s death penalty.  The facts of the story expose human nature’s habit of “us and them” categorization.

The Texas’ murders could have been anywhere in America. Anand Giridharadas’ book is about “us and them” choices people make every day.

There is a causal link in America’s mass shootings that goes beyond the gun lobby and AK-47s.  Many of these horrific events are motivated by delusions of revenge and belief in “us and them” categories.

Today’s examples of “us and them” in America are this weekend’s shootings in El Paso, Texas and Toledo, Ohio. Other examples of “us and them” mentality are our President’s categorization of illegal Mexican’ immigrants as murderers and rapists, a white man’s slaughter of nine Americans because they are Black, a Muslims’ murder of five soldiers because they are American, and the 2019 Poway synagogue shooting in Califorinia.

The focus of Giridharadas’ book is the maiming of Raisuddin “Rais” Bhuiyan. Bhuiyan is an aspiring American émigré from India, who is shot in the face by Mark Anthony Stroman.

Stroman murders two and maims Rais Bhuiyan, because he sees himself as a part of “us” (Americans) and his victims a part of “them” (Arab terrorists).  Ironically, none of the three victims are Middle Eastern.

Like our President’s slander of Mexicans, a white man’s slaughter of Blacks, a Muslim’s murder of soldiers in 2015, and the 2019 murder in a Jewish synagogue, Stroman believes anyone that looks or acts like “them” is not worthy of “us”.

Bhuiyan’s life is worthless to Stroman because he is avenging destruction of the World Trade Center in New York.  To Stroman, Bhuiyan and two un-related Asians are terrorists because of the color of their skin.  Ironically, both Stroman and Bhuiyan, in the beginning of this true story, think in “us and them” terms.  By the end of Giridharadas’ book, Stroman and Bhuiyan realize there is only “we”.

Bhuiyan and Stroman are polar opposites in many ways but the same in some ways.  Bhuiyan is raised in a loving family in India.  Stroman is raised by an uncaring mother and stepfather.  Bhuiyan is strongly supported by his family to get a good education.  Stroman is ignored or abused by his family and drops out of middle school.  Bhuiyan excels in a private India’ school and becomes an elite citizen of Bangladesh’s government Air Force. Stroman is a “lost boy”; in and out of jail, and largely educated by government penal institutions.  Bhuiyan decides to immigrate to America.  Stroman knocks around Dallas, Texas, slipping in and out of jobs and jails.

However, Bhuiyan and Stroman are alike in their social isolation.  Bhuiyan arrives in America without friends or family.  Stroman breaks ties with family and makes few friends.  Stroman isolates himself from society with drugs that make him belligerent.  Stroman is prone to relationships with fellow societal misfits. Bhuiyan isolates himself from society by the circumstance of being a stranger in a strange land.  Bhuiyan moves from New York to Dallas because a fellow Asian immigrant offers him a job.  Stroman is a “…True American”.   Bhuiyan is an aspiring “…True American”.

Bhuiyan’s early associations in America are with fellow Bangladeshis with the goal of finding employment.  Stroman’s associations are with outliers of American society with the same goal of finding employment.  Bhuiyan’s effort to find jobs is difficult because of his recent immigration and ethnic isolation.  Stroman’s effort to find lawful jobs is difficult because of his prison record, drug use, and volatile temper.

Stroman is convicted for one of his two Dallas’ murders and sentenced to death.  After ten years of appeal, Stroman’s execution is imminent.  Bhuiyan, in that ten years, continues his journey to become a “…True American.”  In the course of their troubled lives, Bhuiyan and Stroman grow to understand each other’s humanity.

Stroman re-imagined his life as his execution date approaches.  On the face of Stroman’s written and video confessions, Stroman either manipulates the media or has truly recognized the error of his ways.

Stroman may have grown to understand, humanity is not a matter of “us and them” but a complicated mix of good and evil in every human being.  Ironically, Stroman’s and Bhuiyan’s journey is through religious belief, one as a Muslim; the other as a Christian.

Stroman is executed by lethal injection on July 20, 2011.