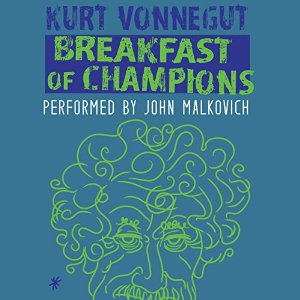 The author, Kurt Vonnegut, offers a fascinating glimpse of a mind teetering on, and then falling over the edge of reality into insanity.  One might classify “Breakfast of Champions” as a surreal satire but that diminishes its insight to insanity.

“Breakfast of Champions” is an imaginative and underrated masterpiece.  The underestimation is realized by the listener in John Malkovich’s excellent narration.

There are no heroes in “Breakfast of Champions”.  There are three main characters.  There is the teller of the tale, Kilgore Trout, and Dwayne Hoover.

Vonnegut clearly satirizes the maladies of the American twentieth century but he concretely reveals how wealth, poverty, and escapism grind people down and compel abhorrent, often violent, and insane acts.  He exposes the American dream’s illusion of happiness.

In Vonnegut’s story, our Creator is a tinkerer who creates machines that are known as human beings.  These human beings are set in motion, endowed with consciousness, and no longer controlled by the Creator.  They are machines that follow the laws of physics and are self-sustaining, reincarnating machines that live forever without recollection of past lives.

The teller of the tale is not revealed until the last chapters of the book.  It is the Creator of humankind.

Kilgore Trout is a science fiction writer who is invited by an admirer of his books to receive an award, in a coal mining town, for his pornographic science fiction stories.  The award is for the greatest writer of all time.  Trout is at first reluctant to take the trip to the coal mining town but succumbs to their acclaim for his fame and begins hitchhiking across the country to receive the award.

Dwayne Hoover is one of the richest men in the coal mining town from which Trout is receiving the award.  Hoover is an auto dealer.  He is the best employer in town, with the best employment package; including employee health plans.

However, the largest employer in town is a coal producer.  The coal company is an environmental polluter, low wage provider, and the biggest cause of citizen illness in town.

Trout and Hoover may or may not know each other but the Creator knows what is going to happen when Trout finally arrives.  In Trout’s hitchhiking progress he meets fellow machines (people who are coping with life).  Their stories are of middle class lives that remind reader/listeners of the passions, weaknesses, and desires of all human beings.  At the same time, the Creator explains what it is like for people that live in coal mining towns.  There is Hoover’s “girl Friday”, the homosexual piano player, and an artist who is recently awarded $5,000 for a painting.  Each machine (person) plays a role in a developing crisis that approaches at the speed of Trout’s hitchhiking progress.

A reader/listener feels bad things are going to happen as the story progresses.  Hoover is taking what the Creator calls “bad chemicals”.

At one point Hoover cannot speak except to repeat one word of a sentence said to him by another.  Hoover crosses the street and feels, with each step, he is sinking into the earth.  Hoover returns to his office, calls his girl Friday, and says he needs her to come with him to a local motel room to relieve a persistent erection.  Both Hoover and his girl Friday have lost their spouses; i.e. Hoover’s wife by suicide; girl Friday’s by war.  They have been lovers for some time.

Hoover continues taking bad chemicals.  The Creator arrives at a bar in town.  Trout arrives at the same bar.  The piano player is playing.  It is somewhat unclear but Hoover shoots the piano player in the back of the head, and bludgeons his girl Friday.

Trout tries to stop the beating of the girl, and the tip of Trout’s finger is bitten off by Hoover.  Hoover is arrested.  The piano player is dead.  Girl Friday is concussed, and Trout has his hand wrapped in a bloody handkerchief.  Hoover is taken to jail; girl Friday, the dead piano player, and Trout are on their way to the hospital.

Vonnegut seems to be explaining that money is not happiness.  Human beings have free will to be good, bad, morally upright, or insanely brutal.

Having a job that barely offers the basic necessities of life only reinforces machine-like living.  Destruction of the environment diminishes those who work for dirty industries and those ancillary businesses that suck off polluter’s productivity.  Drugs are a way of escaping reality but they have consequences. Some machines (people) fall off the edge of sanity, become violent, and sometimes murder innocent bystanders.

“Breakfast of Champions” is not only a story of the 1970s.  It is the story of yesterday’s school shootings, postal syndrome killings, the Paddock atrocity in Las Vegas, and Donald Trump’s delusional attempt to void America’s 2020 Presidential election.  Vonnegut suggests a human being, whether there is a Creator or not, has free will.  Vonnegut implies humans are choosing to be machines.