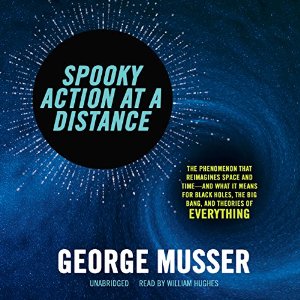 Spooky Action at a Distance: The Phenomenon That Reimagines Space and Time-and What It Means for Black Holes, the Big Bang, and Theories of Everything

“Spooky Action at a Distance” (also called entanglement) collapses the theory of space just as Einstein’s theory of relativity collapsed time.  George Musser argues that experimental evidence suggests neither space nor time have form or matter in an Aristotelian sense.  Aristotle explains the nature of things by suggesting an object perceived by the senses has form and matter.  By Aristotle’s definition, both space and time are perceived by the senses; therefore they have form and matter.  Einstein’s theory (experimentally confirmed) shows that time is relative which denies precise form or matter.  Time changes based on an observer’s relative location, and the speed of observer and observed.

ALBERT EINSTEIN (1879-1955, Einstein’s theory (experimentally confirmed) shows that time is relative which denies precise form or matter.  Time changes based on an observer’s relative location, and the speed of observer and observed. )

Musser notes that with the advent of quantum theory, in Einstein’s view, the same holds true for space because of the experimental proof of “Spooky Action at a Distance”.

John Stewart Bell and David Bohm note how elemental particles, separated by wide distances, can be manipulated to mimic or oppose each other’s spin.  It is as though there is no space between two particles because the action occurs simultaneously; in other words, faster than the speed of light.

The ramification of this “Spooky Action at a Distance” is that space has no inherent meaning.  Both space and time are a fiction created by the senses.

With Bell and Bohm, the apple still falls to the ground but it may have nothing to do with gravity but because of an unseen phenomenon; i.e. something that is non-local and unrelated to Newtonian locality’s cause and effect (maybe dark energy or dark matter that connects everything to everything).

Musser broadly explains this phenomenon as the difference between locality and non-locality in the cause and effect relationship of existence.  With Newton, all action is presumed to be based on locality with gravitation of the earth causing an apple to fall to the ground.

“Spooky Action at a Distance” calls into question the need of space or proximity.  It also raises questions about the speed of light as a limitation in the area of cause and effect; i.e. if “Spooky Action at a Distance” reflects instantaneous change; then cause and effect have no speed limitations. Parenthetically, the idea of inflation at the big bang is replaced by principle of spooky action.

Black holes are also re-imagined with the principle of “Spooky Action at a Distance”.  Maybe black holes are the source of new galaxies being formed in other universes.  It may be that this is still a cause and effect universe but a theory of everything escapes us at the moment because of its undiscovered nature.

One of many things that are interesting in Musser’s book is that Einstein may have been ahead of Niels Bohr in appreciating Quantum Theory even though the idea set Einstein on edge.

There is hope for an undiscovered truth that will bring the nature of things into a theory of everything that is more predictable than the probabilities of quantum mechanics.  This may still be a “cause and effect” universe.  Maybe Smollin is right and too much research and investment is committed to string theory at the expense of other “theory of everything” ideas.

Musser’s story reminds one of research done on Einstein’s brain.  The size and number of dendrites and synapses of Einstein’s brain were found to be the same as in normal human brains. However, every human has glia cells in their brain that have a function that does not comport with normal electrical connections but still transmit information to the autonomic and cognitive functions of the brain.

Neuroscientists found that the glia cell-count in Einstein’s brain is higher than the average for most human beings.  The glia cells were found to be the source of a different mind/body connection that transmitted information in a different way.

One wonders, is that why Einstein could see what others could not?  Re-imagining is what Musser infers is needed in today’s physics’ departments.