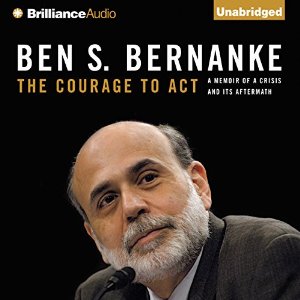 The Courage to Act: A Memoir of a Crisis and Its Aftermath

Politics and administration is a marriage of necessity.  Ben Bernanke writes a “nuts and bolts version” of the role of the Federal Reserve in the United States during the economic crises of 2007.  Bernanke is the chairman of the Federal Reserve during the near collapse of the world economy.  The story Bernanke tells is consistent with most details revealed by Tim Geithner and Henry Paulson (the former Department of the Treasury Secretaries) during the worst part of America’s 2007-2008 global financial crises.

What Bernanke adds to Geithner’s and Paulson’s version of events is a more transparent understanding of how American politics and administration dealt with the greatest economic crises since 1929. These three managers, along with elected officials and other public administrators, cussed, discussed, agreed, and disagreed on actions taken to stabilize the American economy.  Without a level of cooperation between politics and public administration, it is entirely possible America would be in the middle of a second great depression.

The mortgage crises of 2007 is a “Black Swan” event in American history.  A “Black Swan” is a metaphor for an event that is generally unforeseen that changes the direction of history.

The packaging of real estate and home mortgages of varying levels of security leads to the mistaken belief that housing and commercial land prices will always increase as the economy expands.  This false belief led to sales throughout the world of figurative IEDs (Improvised Explosive Devices”) that bankrupted individuals, corporations, and Nation-State economies.  The shock waves of these instruments of economic mass destruction continue to impact the world economy.

With the advent of computer technology, the added assets in derivative instruments became so complex that individual human judgement of value is clouded.

With each individual asset added to a conglomeration of houses, property, and/or stocks–value changes.  The change is meant to spread risk and increase the financial stability of combined assets.  However, as similarity of combined assets accumulate, the created aggregate becomes more (rather than less) vulnerable to market change.

The rising risk of these combined securities is compounded by “independent” rating agencies.  If vulnerabilities are not clearly understood, sellers of these security conglomerations rely on ratings from analysts that underestimate volatility.  That misunderstanding is harmful, because both sellers and buyers are incentivised to buy and sell a security that is not clearly understood.

When one of the derivative assets begins to lose value; particularly if the asset is related (like land and vertical construction), all assets in the packaged security are infected by loss of value.

Further, rating companies lose their objectivity.  They may be incentivized by the same companies they are evaluating; or they may be paid for their review productivity rather than the quality of their investigation. Greed takes over both buyer and seller.

Though this explanation of derivatives is undoubtedly too simply described in this review, it is shown in Bernanke’s, Paulson’s, and Geithner’s books to have been a proximate cause for the loss of trillions of dollars in the world economy.

What makes Bernanke’s book interesting is his explanation of how politics and public administration worked together to right America’s sinking economy.  Even today, recovery is not complete but the ship-of-state did not sink.  “Working together” is a qualified description of what happened based on Bernanke’s view.  There were bitter disagreements among elected and administrative agents that could only be resolved with an appreciation and exercise of politics.

Politics have become synonymous with lying and misrepresentation in the modern world.  Some say President Trump exemplifies that belief.

Democrats were not listening to middle class America.  Politics represent the will of people who are being governed.  Without politics, the best intentions of administration devolve into ineffective and autocratic actions that fail to serve the needs of a country’s citizens.

Not to defend Trump, but his election is a consequence of ignoring the importance of politics in determining what is right or wrong in America’s democracy.

On many occasions, Bernanke shows how elected officials remind administrators of the real-world impact of their policy actions.  The give and take of politics is the bridge between a bureaucratic idea and citizen impact.

The Affordable Care Act is not perfect because of politics but modifications made are the result of political input from the constituents of American Democracy.

Those constituents are companies, professions, and individual citizens represented by elected officials who work with government agencies responsible for administration.  It is a messy process, but politics is a bridge between thought and deed that can only be replaced by autocratic dictatorship; i.e. a dictatorship that inevitably has unintended consequences; that ignores politics, and dictates what is good.

Parenthetically, the crises of 2007 is repeatable.  Today’s political climate is to deregulate the economy.  The political intent of deregulation is to unleash capitalism.  However, deregulation gives reign to both good and bad qualities of human nature.  As Mark Twain noted, history does not repeat, but it does rhyme.

The Federal Reserve, the Departments of Treasury, and America’s elected officials successfully saved America from a second Great Depression.

2 thoughts on “POLITICS AND ADMINISTRATION”