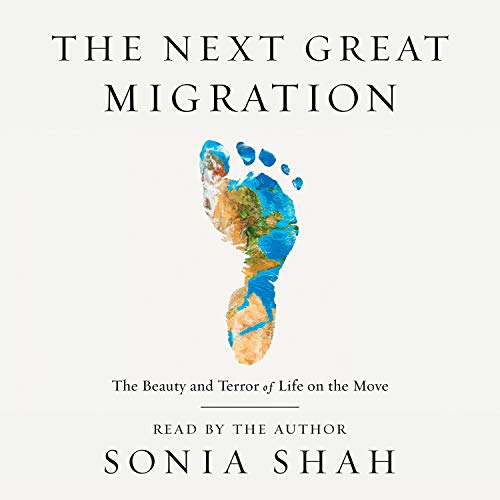 Sonia Shah takes a broad look at migration.  She personalizes her view and, at the same time, writes about the broad tableau of nature’s migratory imperative.  Myths and misunderstandings are exposed by Shah.

The lie of Disney’s lemming suicide documentary is largely forgotten in the 21st century.  Disney implied overpopulation leads to a deep-rooted impulse to compel millions of lemmings to jump off a cliff to their death.  She notes the documentary is a staged lie.  The only truth is that scarcity and fear compel animals to migrate.  There is no mass instinct for death.  There is only an instinct for species survival.

Shah notes the fundamental motivation for migration is survival.  Whether writing about butterflies or human beings, the animal kingdom chooses to migrate because of changes in their environment that degrade their way of life.  It is not an easy choice to move.

Shah explains humans fear change.  One imagines what it is like for a young adult to move to a foreign country that speaks a different language, is exposed to a different culture, knows only a few fellow countrymen, and is thrown into a job market that makes or breaks their future.

Shah correctly identifies the idiocy of Trump’s classification of migrants that are “…bringing drugs, they’re bringing crime, they’re rapists, and some, I assume, are good people”.

That is true of all people in the world, whether American or foreign born.  Human nature “…is what it is” as Trump’s callous comment about Covid19 deaths reiterates.

A young person may have left his home country because of economic, environmental, or political changes that threatens life, but it is a life he/she understands.  Shah notes, that is the “…Terror of Life on the Move”.

Though it is cliché—America is founded by migrants.  Even Trump’s parents were migrants. Shah’s parents are doctors from India that migrated and made a life in America in ways that serve the needs of their new home.  They gave birth to an American-born daughter who has contributed to America’s understanding of migration’s beauty and terror. Migrants are not America’s burden.  They are America’s hope.