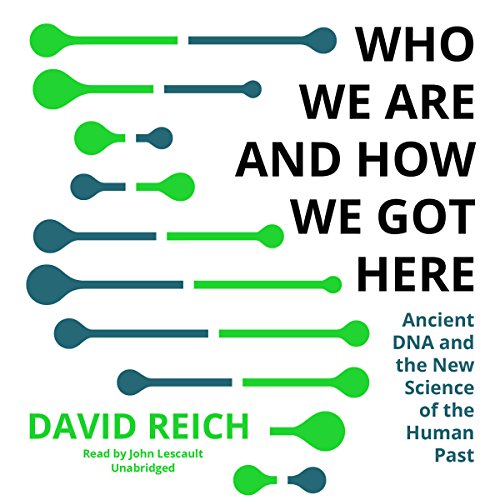 Who We Are and How We Got Here

Reich explains how the concept of the origin of homo sapiens has evolved since the discovery of “Lucy” in East Africa in 1974.

Few scientists disagree about humankind’s place of origin.  It may have been somewhere other than East Africa, but human origin is genetically linked to the African continent.

However, Reich notes that geneticists no longer believe African origin is an adequate interpretation of the wide differentiation of human beings.  The evolution of homo sapiens is not like the branches of a tree but more a tapestry of interwoven threads.

Listening to “Who We Are and How We Got Here” reminds one of the Dragnet’s 1950s-character Joe Friday saying, “just the facts ma’m”.  Aside from Officer Friday’s hint of sexism, it is never just the facts.

Genetic evolution is always interpretation of facts.  Interpretation is David Reich’s “Achilles heel” for exploring and expanding DNA research to determine “Who We Are and How We Got Here”.

Humans interbred to create a fabric of intermingled genetic characteristics that came together, separated, re-combined and changed over thousands of years.

Genetic discoveries of Neanderthal and Denisovan genetic markers show there is no direct line of descent from the “Lucy” origin of homo sapiens.  Genetic studies show that DNA changed as the human species grew. Some genes survived and evolved while others disappeared. Current theory discounts the principle of an “immortal gene” in the sense that the origin genes changed into something entirely different.

The great controversy that Reich explores is factional resistance to genetic research because of fear of misuse of the data.  There is ample evidence to substantiate that fear.

In 2007, Dr. Watson told a British journalist that he was “inherently gloomy about the prospect of Africa” because “all our social policies are based on the fact that their intelligence is the same as ours, whereas all the testing says, not really.”

Reich adds to the “Watson story” by saying he met Watson and was appalled by his comments about Jews being intrinsically smarter than the general population.

Somewhat disingenuously, Reich notes that a disproportionate number of Ashkenazi Jews have received Nobel prizes. Is that fact relevant to genetic research? Does it apply to all Jews or just Ashkenazi Jews. Reich is an Ashkenazi Jew. Is this a reflection of the same concern over misuse of genetic information?

Genetic facts have been used by prominent scientists, like Watson, and ignorant political leaders, like Adolph Hitler, to falsely interpret genetic evidence. Genetic information opens a door to racist arguments for racial superiority.

Information banks created by Google, Facebook, Microsoft, and Amazon are weapons of privacy destruction. In modern times, the only possible defense is “a right to be forgotten”.

One comes away from Reich’s book only semi-convinced of his search for truth through genetics.  Reich insists that the benefits of genetic research far outweigh the potential harm the research may cause.

His point is that there are genetic studies that prove some genetic markers make people more susceptible to disease like anemia for blacks and Tay-Sachs disease for Ashkenazi Jews.  With exposure through genetic research, these medical maladies may be cured.  Without knowledge of genetic predisposition, there is less focus on what might cure certain diseases.

Dr. Watson is a Nobel prize recipient.  Look at what his interpretation of genetic facts became.

Six million Jews were murdered by Nazi Germany’s belief in a master race of genetically “pure” Germans.  Reich’s work suggests there are no “pure” races. There are only similar genetic traits among a few isolated populations.

Do potential medical benefits from genetic research outweigh a racist use of genetic facts?  “Who We Are and How We Got Here” seems much less important than “Here We Are and What Can We Do About It”. Particularly considering today’s pandemic.