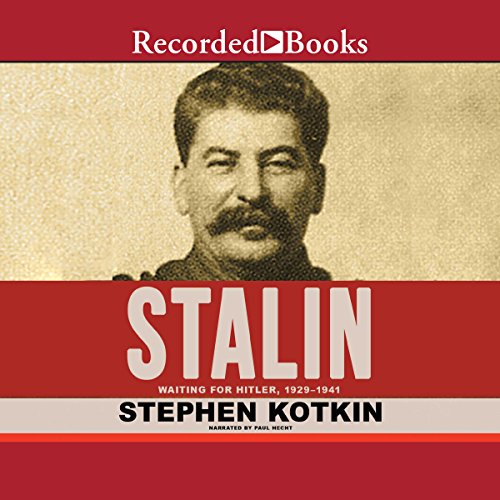 In 1939, Churchill calls Russia a riddle, wrapped in a mystery, inside an enigma.  Stephen Kotkin unravels some of that enigma in “Stalin. Volume II” but the unraveling is marred by details that will only appeal to historians; not dilettantes. Nevertheless, a dilettante listening to nearly 50 hours of narration will find much to recommend Kotkin’s second volume of what is to be a trilogy.

Since Russia’s invasion of Ukraine on February 2nd, 2022, the same questions may be asked of Putin. The answers are similar except Putin is at the beginning of his career as “The Red Tsar”.

In “Stalin, Volume II” Kotkin describes a despot.  Stalin controls a population of over 109 million people before and during WWII.  Before the war, it is estimated–between 5.7 and 7.0 million die from famine in Stalin’s Russian agricultural collectivization.  During the war, Russia is estimated to have had 10,700,000 military deaths, and 12,500,000 civilian deaths, of which 1,000,000 were Holocaust victims.

It seems Stalin’s administration before and during WWII led to 23,000,000 Russian deaths. In contrast, Hitler’s administration’s toll is estimated at 7,000,000 deaths; of which 6 million were Jews.

This is not to trivialize loss felt by any culture or nation, but–none exceed Stalin’s atrocity.

(An exception may be China and the famine during Mao’s administration. An estimated 45,000,000 died in the 1958-62 “Great Leap Forward”, led by the “Gang of Four”, a cabal that Mao later opposed.) Communism is clearly shown to be a treacherous and ultimately failed form of governance.

Kotkin infers Stalin is neither a mad man nor committed idealist.  Stalin is driven by an insatiable need for power and international influence. This seems an apt description of Vladmir Putin.

Kotkin shows Stalin is highly calculating more than paranoid.  The clue is in the fact that Stalin never countenanced bodyguards because he did not fear assassination.  His longevity is the result of pragmatic use of power to eliminate rivals.  (Navalny comes to mind in the case of Putin.)

Stalin assiduously pursues the preeminence of Russia as a communist state, not a Stalinist state.  Contrary to some historian’s analysis, Stalin did not intend to create a “cult of personality”. Kotkin infers Stalin’s goal was to create a wider, more hegemonic, state of communism. (This may be where Stalin and Putin are different. Putin seems to pursue a “cult of personality” more than a hegemonic communist state.)

Stalin’s sleight of hand maneuvering is accomplished by publicly denying honorifics as leader of the state.

With that pirouette, Stalin systematically undermines any rivals by using state apparatchiks like the NKVD to arrest, torture, and obtain confessions. By branding rivals as “enemies of the state”, Stalin eliminated leadership competition.

Because Putin pursues a “cult of personality”, a Stalinist purge would be a hyperbolic characterization of his political actions. However, Putin is at the beginning of his role as dictator.

Stalin operates as a bully without outwardly appearing to be a bully.  Each competitor who defies or competes with Stalin’s policies or position is confronted after gathered false or true accusations.

A confrontation can be direct or indirect depending on Stalin’s whim. If it is a close associate, confrontation is personal and accusatory in a way that causes some to commit suicide; some to be disgraced and sent to a gulag, and a few to defect.

Through personal intimidation, and the help of a secret police, Stalin systematically destroys public perception of potential competitors.  They are summarily tried, convicted, and sentenced to Gulags, or executed.

Stalin replaces executed competitors with young followers.  They are drawn from backgrounds of a less grounded education; similar to Stalin’s.  These young followers become fierce defenders of Stalin; undoubtedly, in part, out of fear, but also out of appreciation for their gift of limited power and prestige in roles traditionally held by older citizens.

A negative consequence of this system of promotion is lack of experience in leadership or management.

Kotkin notes an estimated 90% of experienced military leadership is removed by Stalin before the war. The consequence is to make cannon fodder of many Russian soldiers as they are thrown into battle against better equipped and experienced German soldiers.  Nevertheless, Stalin maintains control of Russia by recruiting from the young who are motivated by their own ambition.

Stalin, above all else, is shown to be a pragmatist in his increasing control of Russia after the revolution.

Stalin’s competition is either exiled or jailed.  His ideological rival is Trotsky whom Stalin tries to have assassinated after exile from Russia.  (Stalin finally succeeds in having Trotsky assassinated in Mexico.)

Another example of Stalin’s pragmatic effort to extend territorial influence is in his playing Chiang Kai Shek forces against Mao’s communist movement.  On the one hand, Stalin wants to spread communism in China but not Mao’s version.  When Chiang Kai Shek is captured by Chinese communists, Stalin forbids Mao from executing him. Stalin insists on Chiang being released to join with the communists to combat Japan’s interest.  Chiang refuses to join Mao but Stalin’s influence on China is undiminished. Stalin is playing a long game by offering arms support to Mao while resisting either Japan’s encroachment or Chiang’s defeat of Maoist communism.

Stalin is not characterized as a genius as is evidenced by his being duped by Germany.  Stalin’s pragmatic effort to keep Russia out of war discounted Hitler’s oft spoken opposition to communism.  Stalin fails to intellectually grasp the monomaniacal intent of Hitler.

Stalin is shown by Kotkin to be a consummate consumer of information. He uses information to make decisions about who to eliminate that might challenge his control.  But, Stalin misses the realpolitik intent of Hitler.

In contrast to Stalin’s obsession for information, Hitler is shown to shoot from the hip.  Hitler is neither a pragmatist nor an information addict.  In shooting from the hip, Hitler chooses to fight WWII on two fronts which is the beginning of the Third Reich’s end.

Kotkin’s second volume about Stalin is more for an historian than the general audience. The first volume is more audience friendly.

Nevertheless, the second volume is a worthy history of what makes Russia what it was and may still be.