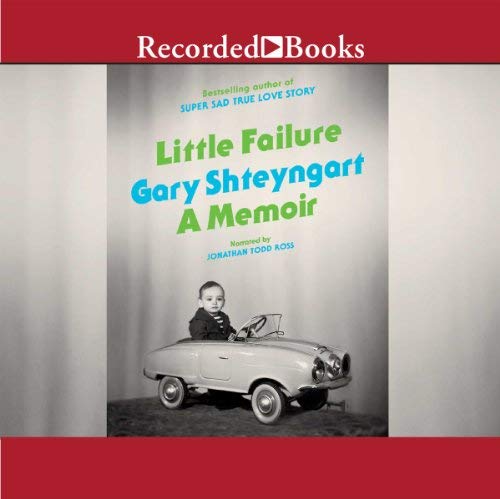 “Little Failure” may seem humorous to some but it is really about the angst and hardship of immigration. Immigration is a particularly difficult subject in today’s America. After all, President Trump claims “our country is full”.

At the age of 38, a memoir of one’s life seems hubris-tic.  “Little Failure” might be a case in point, but the author, Gary Shteyngart, shows more self-loathing than excessive self-pride in his story of coming from Russia to New York at the age of six.

Shteyngart has the good fortune of going to a Jewish grade school (Solomon Schechter) to help him transition from being a Russian speaking immigrant to an English speaking writer.

Shteyngart writes a great deal about his relationship with his father and mother that resonate in some ways with all boys growing into manhood. Both parents love their son.

In Shteyngart’s memoir, his father tells imaginative stories, but also physically punishes him for perceived insubordination and bad behavior.  Shteyngart remembers passive/aggressive actions by his mother; e.g. a habit of not talking to him as a way of punishing perceived transgressions.

As with some maturing male children, Shteyngart is obsessed with sex.  He covets attention of older men as father figures.  He desires women that never give him a serious look until he is 20 years old.  He compensates for inattention by being a class clown; which is one of many coping mechanisms used by adolescents with low self-esteem.

Sthteyngart writes that he is the apple of his grandmother’s eye and his parents have high expectations for him.  Sthteyngart is expected to excel in school to become a doctor or lawyer.  However, he finds he does not have enough interest or ability to achieve those goals and turns to writing.

He goes to Oberlin College, partly because of a girl, but primarily because it offers escape from home and the potential for meeting his parent’s expectation.  He takes two majors, the first is political science and, presumably, the second is English or literature.  The political science is for his parent’s push for law school.  His other  major is to feed his natural interest.

Sthteyngart becomes something of a hippie; i.e. smoking dope, drinking, and generally goofing off, but he manages to keep his grades high enough to satisfy his parents and feed his ambition to be a writer. (This is not a picture of Sthteyngart but and example of hippies of his day.)

He actively supports the first Bush’s election campaign as a confirmed Republican.  He covets a financial patron, a father figure, to support his vices and the pursuit of writing. He turns to psychoanalysis for better understanding of his inner-life.  He believes psychoanalysis helps him cope with his insecurities.

The valuable part of the story is about being an immigrant in a strange land. From the time of George Washington, many American Presidents have discouraged immigration. The grounds for their opinions range from fear of cultural contamination to national security threat–to today–when our President says America is full.

Immigration fear is not a partisan issue; it is a human issue. In 1939, President Roosevelt turned away an estimated 900 Jews on the M.S. St. Louis. Roosevelt turned them away because they were a national security risk. (Over 200 of those 900 immigrants were executed in Nazi extermination camps during WWII.)

Of course, today’s national security risk is religious affiliation or gang membership. Trump does not care if you are escaping poverty, violence, or death because America is full.

Mr. Trump implies every Muslim is a terrorist and every Latino south of the border is a gang member.

Shteyngart’s first book is published with good reviews.  The best that can be said about “Little Failure” is that it tells a story of growing to manhood in 20th century America; before Donald Trump.

“Little Failure” is as its title says, a memoir, but it seems more like displaced hubris in the light of today’s American government.  Aside from the immigrant parts of Shteyngart’s life, little new coming-of-age’ ground is broken. Few teaching-moments are harvested to lead listeners out of the lacuna of President Trump’s mind.

One thought on “Immigration”