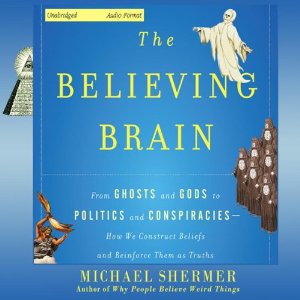 Michael Shermer is an academic psychologist, writer, myth buster, and faith breaker.  Shermer characterizes himself as a religious skeptic. His underlying skepticism about God is grounded in 1.) prayer’s failure to cure the incurable, 2.) the nature and history of recorded life, and 3.) scientific studies of brain function.

Shermer writes of personal prayers’ failure to heal a medically un-heal-able friend.  He recounts common sectarian stories that occur in the history of different religions in the world suggesting that stories of religious belief are genetically imprinted; i.e. a condition of human memes rather than proof of God.

Sherman has company in that belief. Richard Dawkins wrote The Selfish Gene to make the same mimetic point.

Shermer reviews brain function studies that confirm neurological causes for “out of body experience”, “voices from the unseen”, alien abduction, white light cognition during near death experience, and other anecdotes that mythologize the existence of other beings, God , the devil, and/or an “after life”.

Aside from Shermer’s disbelief in God, his most substantive observations are the experimentally reproducible studies that clearly demonstrate man’s ability to invent stories, deny physical reality, and act in socially reprehensible ways.

Shermer notes how such things as framing an idea distorts human cognition.  Scientific studies show that human cognition is proven to be biased by a person’s belief system.  Shermer cites B. F. Skinner’s operant conditioning and the famous Milgram obedience experiments to show how human perception, and more consequentially, behavior are manipulated by human instinct and contextual bias.

It is no wonder that “eye witness” accounts of crime are being discounted as a source for conviction of presumed perpetrators.

The foundation of Shermer’s skepticism is what he calls “patternicity” and “agenticity”.  “Patternicity” is the human compulsion to see causal relationship in the physical world.

The irony of Shermer’s analysis of brain function is that “patternicity” is an essential tool of the scientific community.

Without the use of “patternicity”, how would Bohr, Einstein, or Paul Dirac have advanced the world of physics?  These men believed something before science could prove them right.  They had faith in their own judgement when experiment could not prove their point.

Shermer notes that science is the key to knowledge.  Science requires experimentally reproducible results. When experimental results are not the same, knowledge escapes.  Experiment recently confirmed existence of the Higgs Boson 16 years after François Englert and Peter Higgs created the theory.

One must presume Shermer chooses to call himself a skeptic because—when asked if he believes in God, no experiment can be done to confirm or deny existence.