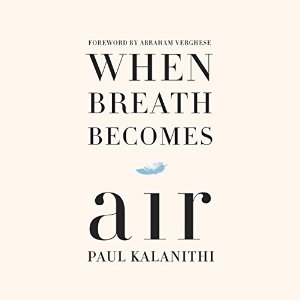 Written by: Paul Kalnithi with foreword from Abraham Verghese

“When Breath Becomes Air” memorializes a disease that ravages lungs. Paul Kalanithi did not die from the Corona Virus but from a type of a cancer that attacks lung function. The Corona Virus is not a cancer. But, the Corona Virus creates an infection that simultaneously reduces our immune response. The primary organ of attack by Covid19 are lungs that cannot process air.

Kalanithi writes about his life.  It is a short life, infused with stress, success, and failure.  Paul Kalnithi is the son of India immigrants who grows up in Kingman, Arizona.  (Kingman is a town of less than 29,000 people lying between Las Vegas luck and Phoenix senior living.)

Paul’s parents, particularly his mother, demand much from their children.  Paul is exposed to the classics of literature at an early age to supplement his private school education.  His educational interest is split between literature and science.

PAUL KALANITHI’S PARENTS (A MEDICAL PHYSIOLOGIST AND A CARDIOLOGIST LIVE IN KINGMAN, AZ)

Paul is accepted at Stanford to pursue certification as a neurosurgeon.  His motivation to become a doctor is partly based on a desire to understand the meaning of life.  If there is meaning, Paul believes it lies in the lacunae of the mind.

Within one year of Paul’s ten year journey to graduation, he is struck with lung cancer.  After a first round of treatment, Paul’s cancer is in remission and he returns to Stanford to finish his residency.

As he nears completion of residency, the cancer reasserts itself and Paul decides to write “When Breath Becomes Air” to explain what he believes about life.

There are many messages to humanity in “When Breath Becomes Air”.  It is founded on insight drawn from what Paul Klanithi has read and what he has experienced.  No life is without stress and failure.  The best one hopes for is to live and leave life as decently as Paul Kalnithi. He died at 37. He was at the peak of his career.

Alex Trebek died today, 11.8.20. He fought pancreatic cancer and filmed “Jeopardy” up until two days before his death.

Those who choose to listen to “When Breath Becomes Air” will look at life differently.  Not because of belief in God or the fallibility of human beings, but because we all live between Las Vegas luck and Phoenix senior living.

The Pfizer vaccine has been approved for children 5 years and older. It is time for parents to protect their families and others from the ravages of Covid19. Measure the odds–make a decision based on science, not politics.

This news reminds us of the health care workers, safety officers, farmers, public employees, news reporters, grocery employees, and volunteers who risk their lives every day.