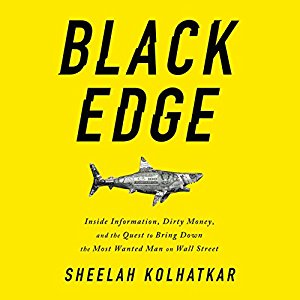 Black Edge: Inside Information, Dirty Money, and the Quest to Bring Down the Most Wanted Man on Wall Street

In “Black Edge” Sheelah Kolhatkar masterfully recounts the dark side of capitalism.  The American stock market is a tremendous source of energy (private money) for entrepreneurial capitalism.  At the same time, a poorly regulated stock market pollutes the capitalist ideal.

An obvious example is the stock market Ponzi scheme (a false enterprise offering high returns that really come from later investors) built by Bernard Madoff. He victimizes thousands of people around the world.

After many years of high living, Madoff is caught and presently serves a 150 year prison sentence.

Kolhatkar explains the meaning of black edge information.  She shows how the American stock market becomes a breeding ground for greed.  In the stock market, black edge information is personal notice to private investors of events that effect stock prices.  The information is proprietary and unknown to the public.  The private investor chooses to buy or sell stock before the public knows of an event that will affect stock prices.

Steven A. Cohen develops an organization, SAC Capital, that revolves around gathering proprietary information before it is known by the public.  Cohen becomes one of the richest men in the world by using that information.

In one sense, this seems a “no harm, no foul” entrepreneurial benefit in capitalist society.  What Kolhatkar infers is that there is harm, and it is foul.  It breeds an organizational philosophy of abuse.  Cohen creates a “dog eat dog” organization that hires and fires people based on revenue made or lost on investment.  Individual traders are compelled to violate the law because they fear losing their high paying jobs. They see their chance of preserving their employment by soliciting black edge information that is not available to the public.  The only criteria for success is money; not family, not friendship, and not society.

One may argue, so what?  Cohen becomes a rich man and is known as a benefactor to charities of his choice based on his accumulated wealth.  Similar arguments can be made for the Koch brothers and their charitable contributions.

The harm is somewhat inchoate but care for others is missing in Kolhatkar’s story of Cohen’s view of life.

Capitalism is an economic and political system for trade and industry that allows individuals rather than a collective determine one’s future.  The capitalist ideal’s upside is that people have more freedom.  The downside is unrestricted human nature becomes brutish and unfair.  Some form of governance is needed to provide rule-of-law.  Without rule-of-law, society devolves into an anarchy of individual interests.

Capitalism is not the problem in America.  It is the failure of government agencies, the President, and congress to protect the Health, Education, and Welfare of the people. Less government is not the answer.

Lives were ruined by Cohen; i.e. some of his closest associates are abandoned, traders operating as information gophers break the law.  Cohen focuses on making money because it offers power and prestige.  The gap between rich and poor widens because of Cohen’s philosophy of life.  In the end, Cohen is not found guilty of insider trading, but many of his employees lives are ruined.

The story of Steven Cohen is the story of a Trump presidency in the United States.  America loses its way when capitalism is only seen through the prism of wealth.  The “Get out of my way” philosophy of Cohen and Trump are cut from the same cloth.  The difference is–one is more financially successful than the other.

The purpose of the American government is to protect the public through rule-of-law.

Every day, we see a President denying immigrants the chance for becoming a part of an American Dream that made America great. We see an Education Secretary intent on dismantling our public education system.  We see a congressional and departmental effort to dismantle health care and welfare.  We see Americans being discriminated against because of their sex, race, and religion.

Human nature is not self-regulating.

Unregulated human nature is brutish.  The checks and balances of the American government are founded on that truth.  When the American government fails to exercise its mandate for the health, education, and welfare of the nation, it diminishes capitalism.  It diminishes a way of life cherished by most Americans.  People like Steven Cohen and Donald Trump are guilty of being human and unruled.

One thought on “THE DARK SIDE”