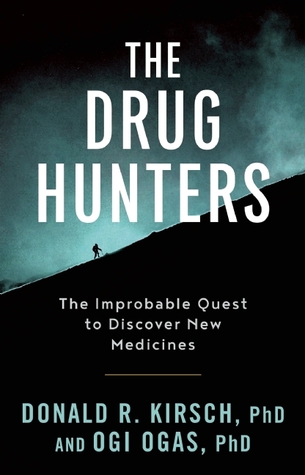 As a science, pharmacology survives in the heart of luck and circumstance.  Donald Kirsch and Ogi Ogas recount the origin and history of drug discovery in THE DRUG HUNTERS.  Kirsch and Ogas explain how drugs evolved from shamanistic ritual and magic to plant extraction and modern synthetic drug creation.  They argue that the complexity of myth, elemental plant extraction, and animal metabolism make the search for effective drugs a casino exercise.

Kirsch and Ogas reveal how scientists, entrepreneurs, and corporations make big bets; garnering wins and losses wrapped in luck and circumstance.  Like gamblers, drug hunters lie to themselves about continuing research on busted bets with bigger financial and emotional investments.  Sometimes they win but usually they lose–no breakthrough is made.  The drug does not work as expected.

The reasons for failure range from false expectation of drug hunters to impure abstraction (or creation) of ingredients.  They add to the list of potential failures with mistaken methods of administration (topical, pill-form, or injection), chemical bonding miscalculations, and human versus animal metabolism. The paths to error outnumber the highways to success.

In Trump’s treatment for Covid 19, the story of “The Drug Hunters” infers he is on a highway where errors outnumber successes.  Trump’s cocktail of drugs were vetted by a team of doctors who concluded “potential benefit from treatment outweighed the relative risks”.

Americans hope for Trump’s recovery but not necessarily his re-election.

So why do scientists, entrepreneurs, and corporations gamble on research?  Because a win can make billions of dollars.  Kirsrch and Ogas imply corporations are reducing their research departments and changing their mode of drug discovery by purchasing companies that have found new and effective drugs.

A troubling implication is that new drug discoveries will not come from corporations.  That leaves new drug discovery to driven independent scientists, entrepreneurs, and government agencies (funded by tax revenue).

Kirsch and Ogas offer fascinating stories of how therapeutic drugs were discovered.  From aspirin to penicillin to birth control; to psychiatric treatment and cancer remediation, they explain how difficult, expensive, and serendipitous the search for effective drugs have been.